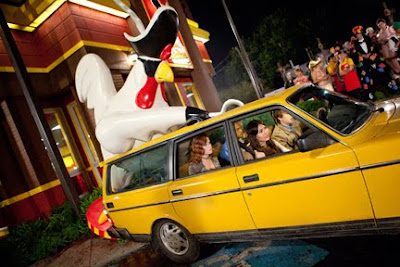 Another take on the Adventures in Babysitting formula only this time it's set at Halloween. Brought to us by the man who executive produced television's O.C. and the Gossip Girl in his directorial debut with a script by Max Werner (The Colbert Report) for Nickelodeon Movies. It's the kind of movie geared to older teens because of some suggestive materials, partying and language even though it has a PG-13 rating.

Set in Cleveland, OH, Wren (Victoria Justice) is not only pretty but is also a bit of a nerd. Her idea for a Halloween costume is to dress like Supreme Court Justice Ruth Bader Ginsburg. Her best friend Roosevelt (Thomas Mann) plans to be some obscure scientist. Wren's best girl friend April (Jane Levy) is excited that the best looking guy in high school Aaron Riley (Thomas McDonell) has a mad crush on Wren and invites her to the most sought after party at his house. Unfortunately Wren's mother Joy (Chelsea Handler) who is working out her widow grief with a MILF younger lover Keevin (Josh Pence) wants to party and Wren has to babysit her little brother Albert (Jackson Nicoll). Albert is a precocious and mischievous kid who hasn't spoken since their dad died. Joy promises to sign the admission papers for her NYU application if she does this one thing. Albert dons a Spiderman costume with strings of firecrackers wrapped under his costume. Wren and April take Albert out trick or treating in the heavily occupied neighborhood filled with costumed residents. Somewhere in the world people still actually indulge in everyone's favorite event that hasn't turned into a “Fall or Harvest Festival” with it's political and religiously correct fanaticism. Wren loses track of her brother while paying too much attention to April's attempts to lure her to Riley's party. The manic search begins.

The secondary characters have a better time in this movie than the usual angst of it's teen heroine. Peng (Osric Chau) as Roosevelt's best friend (because everyone knows that Asians are smart) is dressed like a American Revolution historic character. He's serious but awkwardly obsessed with sex. Fuzzy (Thomas Middleditch) the convenience store clerk who enlists the lost Albert in his scheme to toilet paper his ex-girlfriend's house. Brueder (James Pumphrey) who is giving a party while his parents are upstairs in bed. And Johnny Knoxville as the sleeze who kidnaps Albert in an uncomfortable sequence which is played for laughs. Best of all are Roosevelt's two moms Barb (Kerri Kenney) and Jackie (Ana Gasteyer) who are the stereotypical earth women who chant and endless discuss. They should have their own movie.

Engaging young people, especially Victoria Justice. Otherwise just what one would expect from a teen movie not quite made for TV but really feels like it.
(Review by reesa)