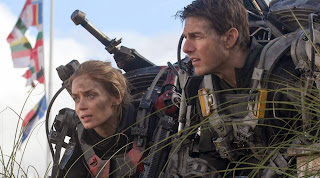 The thing with Tom Cruise movies is you always see Tom Cruise and not really the character. His last movie Oblivion should have left him there forever and never darken our doors again. Thankfully this current film was directed by The Bourne Identity's Doug Liman who knows how to handle intense action and pacing from a screenplay by Christopher McQuarrie, Jez Butterworth and John-Henry Butterworth. The story is based on a Japanese novel by Hiroshi Sakurazaka called All You Need is Kill. The film opened elsewhere in the world last month and has done quite well which is encouraging for it's reception with American audiences. A big scifi actioner that offers great FX, humor and Tom Cruise who for once makes you forget that it's him.

In the future an alien race invades the world and has taken over most of western Europe. They are called Mimics for their ability to mimic and counter military combat strategies. A new combat “jacket” has been developed that is part robotic and heavily armed. Major William Cage (Tom Cruise) is a public relations officer for the United Defense Force and his job is to sell the worthiness of this new technology to save the world. He is sent to London where General Brigham (Brendan Gleeson) orders him to take a film crew and record their victory during the upcoming invasion. Cage who has no combat experience tries to blackmail the general so that he doesn't have to go. Unfortunately it backfires and Cage is sent to the base with a fabricated deserter story. He is forced to join J-Squad led by Master Sergeant Farrell Bartolome (Bill Paxton channeling Avatar's Colonel Miles Quaritch played by Stephen Lang). He's sent into battle where they are ambushed by the Mimics who are waiting for them and it's a slaughter. In the confusion of trying to stay alive, Cage manages to kill an Alpha Mimic and is soaked in it's blood. After he passes out, he awakens again on the Heathrow base and Sgt. Bartolome is once more reading him the riot act.

Cage goes though numerous time loops, gaining experience from each reenactment until The Angel of Verdun, Rita Vrataski (Emily Blunt) realizes that Cage is going through what she had during the battle victory that made her a legend. She lost her ability when she had a blood transfusion. She tries to train him and introduces him to Dr. Carter (Noah Taylor) whose theory about the Mimic's hive mind had authorities thinking he's crazy. Rita and Carter believe that mimics know what's going to happen because the blood soaked into Cage is communicating the battle plan back to the hive mind, the Omega. The live, die repeat theme is played over and over until they can find a way to defeat the Omega.

The concept of the repetitiveness is done quickly with each repeat going a little farther into the future. Cage having replayed several scenarios knows when to duck punches, when Rita will make a wrong decision and where the Mimics will show up. Cruise manages to go from wimp to kick@ss solider effectively. Emily Blunt is convincing as the hard skinned hero whose character doesn't play second fiddle to the male lead that would usually happen in movies. The ending leaves some big storyline holes which were unsatisfying but the rest of the movie is a nice joy ride.
(Review by reesa)

Email ThisBlogThis!Share to TwitterShare to FacebookShare to Pinterest
Labels: Edge of Tomorrow review