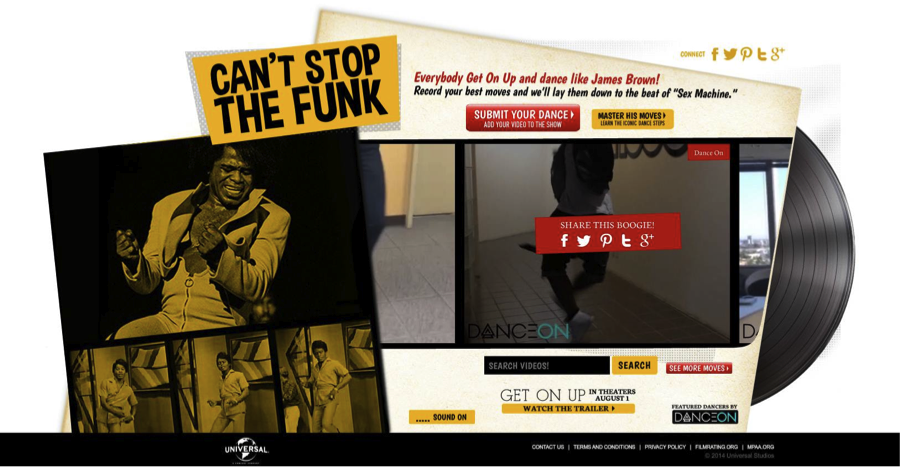 SUPER HEAVY ON THE FUNK! DANCE WITH JAMES BROWN!

Universal is proud to announce the launch of the interactive celebration of the Godfather of Soul: www.cantstopthefunk.com

To flame fan passion for James Brown leading up to the release of GET ON UP, this UGC-fueled treat invites fans to join in an endless high-energy performance. As an endless backbeat of “Sex Machine” plays, a video player--framed in what appears to be the sleeve of a James Brown album cover--anchors this “endless performance” site experience.

Fan videos will be showcased alongside classic dance clips of James Brown; clips of Chadwick Boseman, who portrays Brown in GET ON UP; and original videos from DanceOn channel partners. The funktastic videos can also be shared with friends on Tumblr, Facebook and Twitter.

GET ON UP online - #GetOnUp

In his follow-up to the four-time Academy Award®-nominated blockbuster The Help, Tate Taylor directs 42’s Chadwick Boseman as James Brown in Get on Up. Based on the incredible life story of the Godfather of Soul, the film will give a fearless look inside the music, moves and moods of Brown, taking audiences on the journey from his impoverished childhood to his evolution into one of the most influential figures of the 20th century. Boseman is joined in the drama by Nelsan Ellis, Dan Aykroyd, Viola Davis, Craig Robinson, Octavia Spencer, Lennie James, Tika Sumpter and Jill Scott.

Email ThisBlogThis!Share to TwitterShare to FacebookShare to Pinterest
Labels: fan videos, Get on Up Can't Stop the Funk, James Brown