From The Land of the Moon 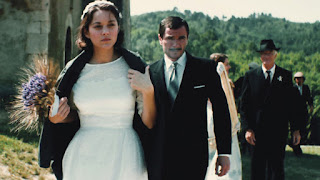 FROM THE LAND OF THE MOON
*½ (out of ****)
From the Land of the Moon moves, inexorably and frustratingly, from wan melodrama to simply more wan melodrama. Here is a film that exists on a specific wavelength, which is a roundabout and more formal way of saying that it’s quite the slog. The central character is a woman whose indecisive actions and murky moral compass keep time with a structural choice on the part of screenwriters Nicole Garcia (who also directed) and Jacques Fieschi that is ruinous to any sense of tension within the character’s plight. It also struggles to connect us to this character on an emotional level, climaxing with a beat that feels entirely unearned.

The film, an adaptation of the novella by Milena Agus, spans twenty years in the life of Gabrielle (Marion Cotillard), but it begins near the end of her story, as she rides in a car with her family, spots a particular address, and runs off toward it in search of, well, something. We then receive the bulk of the rest of the story in flashback, which will predictably lead us back to the moment in the car. It turns out, though, that the bulk of the emotion within that story lay in what happens when Gabrielle abandons the car, calling into question the need for a flashback structure at all.

It turns out to be a lazy storytelling device meant to guide us through two romantic entanglements – one a marriage of convenience and the other an adulterous infatuation – that are equally uninteresting. The marriage is to José (Àlex Brendemühl), a Spanish farmhand for whom Gabrielle feels little or no affection. It’s a way for Gabrielle to appear as a respectable member of a family who essentially wish to arrange this union between the two. It’s a robotic relationship of mutual disinterest, though Brendemühl is able to locate some sense of loneliness in José, giving a serviceable performance whenever he’s onscreen.

Gabrielle soon discovers, through a stabbing pain in her left side, gall stones that need to be treated. She is relocated to an institute that cures the “evil stones” (amusingly, the loose translation of French title, Mal de pierres, to English) by spraying the patient with intense water pressure via a lengthy hose. Here, she meets André (Louis Garrel), whose own illness, brought on, perhaps, by the horrors of war, seems to be in the final stages of having its way with him. Garrel is easily the film’s most valuable attribute, in a deeply felt portrayal of the effects of trauma upon the sufferer, but this fling is essentially a non-starter.

There isn’t anything that Garcia and Fieschi is saying about this relationship, nor about the eventual chasm it wedges in between Gabrielle and José, that approaches insight. The problem is twofold: In tone, the film never wavers from desperate sadness, smothering everything (including the surprisingly candid sex scenes, which are supposed to be passionate) in a wallowing sadness. In the performance of Cotillard, we find a usually terrific actress unable to make sense of an aloof and miserable character. The film’s inability to commit to the tragedy of the story, even as it comes close in the denouement to confronting that tragedy, means that From the Land of the Moon makes it impossible to care.
(Review by Joel Copling)

Email ThisBlogThis!Share to TwitterShare to FacebookShare to Pinterest
Labels: From the Land of the Moon review, Joel Copling