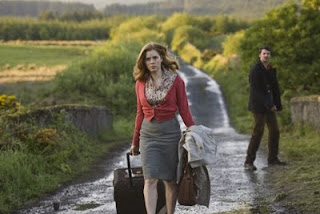 Anna is a little bit disappointed when her boyfriend of four years gives her earrings instead of an engagement ring at their special dinner. When he leaves for a conference in Ireland, she decides to follow him and propose to him on Leap Day. Because according to Irish legend, when a woman asks a man to marry her, he must accept.

Anna (Amy Adams) works as an apartment “stager”. She creates a furnished homey feel to properties on the market that helps realtors sell them, down to baking cookies before the clients arrive. Her boyfriend, Jeremy (Adam Scott) is a cardiologist. They want to move into this exclusive condo in Boston. It was always her dream and she feels lucky to have found someone else who feels the same way. Anna is the kind of person who wants everything in its place. If that place means finding the perfect home to live with your perfect husband, then she will do what she must to insure it. She is encouraged by her fathers’ story of his relatives getting married because of the leap day tradition; she jumps on a plane for Ireland.

Bad weather puts Anna in Cardiff, Wales instead of Ireland. All planes and ferries are grounded. The waters are so bad the private boat she hires drops her off on a beach. In this little town she tries to get help at a small pub. She meets the Irish innkeeper Declan (Matthew Goode) who is in need of money to save his business. He offers to drive her to Dublin in his broken down car. On the way they bicker and banter on the road, while hiking up hills and getting drenched in the rain while she is wearing designer high heeled shoes. Anna is single minded in her goal to get to Dublin by Leap Day. They lose the car, miss the train, have to pretend they are married, and wreck a wedding as they fight off a connection and attraction to each other. He’s hiding a broken heart by making jest of her quest, and she’s uptight and doesn’t know how to relax and have fun.

This is a throw back to the screwball romantic comedies of the late 30’s where 2 unlikely people are forced together and somehow fall in love. But the earlier films had charismatic actors like Claudette Colbert and Clark Gable. Amy Adams is indeed quirky, and Matthew Goode is nice to look at. As pleasant as they can be, they are saddled with an improbable script and slapstick situations going for the cheap laughs like cow piles, and hurling on shoes. I would hope that today’s women are not so desperate to get married that they would go through that much adventure to “snag” their man, especially if they are like her intended, Jeremy who seems too self-absorbed to deserve all this trouble.

Director Anand Tucker who also did Hilary and Jackie and Shopgirl tries to channel Frank Capra in some of the scenes. This is Amy Adams’ movie. She may be today’s Meg Ryan with more spunk and less clowning, the camera loves her. The Irish country side is another big reason to see this movie. If nothing else it was a great commercial for sightseeing in Ireland. Although this is plot has been done so many times before and you know what’s coming a mile away. The hook is in the riddle Declan poses to Anna. If you were in a burning building and you had a minute to get out, what is the first thing you would save?
Review by: Reesa

Posted by Dallas Movie Screenings at 1:50 AM