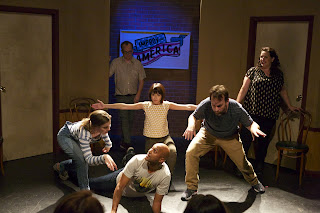 Like any tight group of co-workers that rely on each other, when one gets recognition for their work and rewarded, there is bound to be some envy and self reflection. In the world of stage improvisation comedy the egos are more intensified. Director, writer and actor Mike Birbiglia accurately captures the sensitive and creative quirks of the troupe The Common. Its funny in a serious way as characters come to term with growing up and moving on.

The group has a series of routines the perform with each other before getting on stage. It shows their chemistry and willingness to support each other during their performance. Birbiglia plays Miles the leader of The Common, who teaches improve on the side. He lives in a loft bed in a space with some of the other members.Handsome and charismatic Jack (Kegan--Michael Key) lives with girlfriend Samantha (Gilliam Jacobs) who just fell in with improve and has embraced the medium with an amazing talent. Everyone has unfulfilling jobs to pay the rent. It is no wonder that the closing of the theater fills them with dread. Rumor has it that some producers from an SNL like late night show called Weekend Update may be in the audience. Everyone wants to trot out their best material. But Jack who has a bad nervous habit of hogging the stage and ends up getting a call to auction puts everyone in an awkward position. As happy as the are for him to receive recognition the all long for receiving, they still wonder why him not me.

The pressure on Jack to survive his new high pressure job is not helped by his trope members wanting him to submit their material for consideration to forward to the powers to be. Sam was supposed to auction too, but missed her appointment on purpose. Mike realizes that he's missed his chance for success. Watching Jack on TV in his new gig brings scathing critiques from his former members. As they pull to keep performing without Jack, unaware that Jack is barely hanging on with his boss's constant reminder that he in easily replaceable. The ending may be a little tightly wrapped up, the troupes skits are really entertaining. The actors worked together before the film to sharpen their skills. Maybe wish they did an encore.
( Review by reesa)

Posted by Dallas Movie Screenings at 7:47 AM