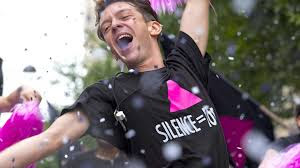 BEATS PER MINUTE
*** (out of ****)
The reality is set upon them from the beginning: No matter what their diagnosis, they will always be considered HIV-positive or, at the very least, associated with the diagnosis. It would be unbelievable that this is, indeed, the reality of those who have joined an activist group trying to find a cure for HIV/AIDS, but then we see the bigoted push-back from citizens who believe that the condition is limited to those who engage in the kind of sexual activity for which the bigots have reserved a crude epithet. That’s when the reality clenches: There are greater stakes than even the physical survival of an entire class of people. This is about existential survival, too.

Beats Per Minute isn’t exactly a biographical account of the early days of this particular group, called ACT UP, although the early segments of the film suggest something of a biographical nature. We are introduced to the de facto leaders of the group – or, at least, those elected to speak on its behalf, such as Sophie (Adèle Haenel), Eva (Aloïse Sauvage), Luc (Simon Bourgade), and others. We learn the radical methods by which they attempt either to educate the masses to lift the stigma on the HIV-positive (or the “poz” as a shorthand) or to disorientate the pharmaceutical companies withholding studies on a drug that could treat much of the ailments caused by the condition.

Much of the film’s surprisingly dense middle section is devoted to that cause, with the ACT UP members staging scenes of disruption within the offices of the pharma company: They fill balloons with “blood” (mostly watered-down, non-toxic paint or red food coloring) and send them flying into windows and onto the desks of the officials at the company. Their vague bleating of uncertainty regarding the release of the study because of a “lack of experts” leaves the ACT UP members unmoved. They don’t want a team of experts to double-check what they themselves have spent months learning to check by reading the science. They want answers, a treatment, and to live.

Eventually, the focus must narrow to a smaller handful of these people. In this case, that means the torrid love affair that sparks between Sean (Nahuel Pérez Biscayart in a towering performance) and Nathan (Arnaud Valois), two like souls who discovered their sexuality through illicit acts by others in their teenage years and who, now, find that the act of intimacy is more important than ever. Sean is a “poz” himself. He could wither away and die the uncomfortable and elongated death of a person with AIDS. He needs the physical comfort of another human to survive emotionally.

The narrowing of the focus, despite Biscayart’s devastating portrayal of a man whose body is failing him and the refreshingly frank attitude toward sex (which is, indeed, explicit but never gratuitous), is the shakier element of Campillo’s screenplay. We gain a certain type of potency in its portrait of illness, but there is also the sense, forgotten in these later segments, of greater stakes beyond a single person or romance. Otherwise, we receive a sprawling account of activism in media res within Beats Per Minute. This is a thoughtfully performed study of the voices that power such activism.
(Review by Joel Copling)