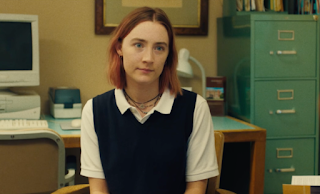 Lady Bird is the story of Christine, a young woman who goes by the name “Lady Bird”, over the course of her senior year in high school. She has a concrete dream of attending university in New York City which she is determined to achieve. Her mother, Marion, is completely unconvinced that she will make it with her work ethic. She also is certain that their family’s financial circumstances will be inadequate for such an expensive tuition. On the contrary, Lady Bird’s father, Larry, is extremely loving and supportive of his daughter.

This film was an interesting and thoughtful story to say the least. The examination of a high school student growing to become an adult and the many obstacles that they face makes for an enjoyable time. I was pleased with how the many aspects of the conflict in the family and Lady Bird’s personal challenges were portrayed. However, this was not particularly a film that wowed me to an extent that possibly warrants me seeing it again.

There were definitely well-developed plot points that would appease a mature audience looking for a good narrative. Some of these included a boy being gay in a religious school where that sexual orientation would obviously encounter some backlash. There were also personal questions of Lady Bird such as who really cared for her and was she really loved by her mother. The life of high school students was captured well with the intersecting components of theater, academics, dances, sex, and popular students all permeating Christine’s life.

Saoirse Ronan played the role to a tee with the rebelliousness and not quite matured character of Lady Bird extending throughout the film. Tracy Letts, the actor who plays Larry, does a phenomenal job at portraying someone who clearly loves his daughter and just wants the family to be happy. He is depressed because he is laid off from his job and subsequently causes economic strain on his family. Letts played someone who was hurt but also had the capacity to do everything in his possible power to benefit his children and wife.

There is an outstanding scene in the film where Larry has just applied for a possible position that is really looking for someone who is younger. Not soon after his interview, he sees his son dressed up who obviously is interviewing for the same job. Larry instantly shows no sign of negative emotion and instead makes sure his son, a recent college graduate, looks good for his interview. Overall, the film was reasonably well done with a couple of golden factors in the script.
(Review by Wyatt Head)