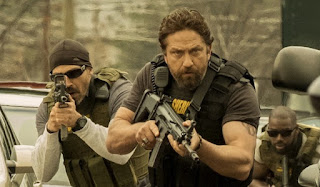 A on of the newest movies directed by Christian Gudegast who also wrote the script with Paul Scheuring, takes a unique plan and plot out of the ultimate bank heist by creating a group of professional bank robbers that attempts to rob a Federal Reserve Bank in Los Angeles.

Making the impossible possible, the established Pablo Schreiber, known as Ray Merrimen, the ex-marine, merciless, cutthroat gang leader, known as the criminal mastermind of the operation, focus on pulling off not only breaking in the Los Angeles reserve bank, but to get away with it too. This has never been done before. The goal is to steal unmarked, untraceable cash in an unlocked-down fortress of money by replacing it with stolen marked money right under the nose of the law enforcement in Los Angeles. Of course, strategy and intelligence plays a big part in the criminal bank robbers working together to pull it off. These bad guys are intense. They are fearless. They are brutal and they will kill anyone who gets in their way.

The plot thickens as Gerard Butler asserts his role as the hard core Nick "Big Nick" O'Brien, the elite team leader of the LAPD to bring own the notorious, brutal, professional bank robbers. In fact, he rather not do things by the books, skimming along the lines of illegal to get the job done. He won't stop at nothing until he brings these guys down. Of course, in the midst of all of that, it doesn not make things any better. Nick is caught up in a collapsing marriage to Debbie (Dawn Olivieri) that contributed to his on going outlandish, psychotic behaviors.

So when Donnie (O'Shea Jackson Jr.) is kidnapped by Flanagan to snitch and expose the operation of his team. Viewers would think that Donnie
getting exposed in front of Merriman and his men he would have been punished or to say the least, end up in a ditch
somewhere. But no: Merrimen questions him, and is apparently reassured by Donnie’s answers that he was captured, tortured
and strong-armed, by Flanagan but told him nothing of their plan. And to think that Donnie exited the federal reserve building without
getting caught, questioned or detained as a delivery boy. In the end when all was said and done viewers had a lot of loose
ends that failed to pull the story line airtight. There were too many mishaps and loose areas that failed in achieving it goal.

However, Den of Thieves is still worth watching. Although there are a lot of unnecessary fillers though out the movie.
(Review by Dr. Dwanna Swan-Ary)

Posted by Dallas Movie Screenings at 10:05 AM