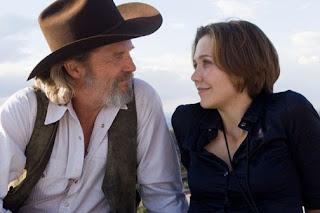 Bad Blake is 57 and a onetime country music legend reduced to playing remote towns with local pickup bands in dicey venues like bowling alleys. He’s not allowed to put his bar bill on his artist tab thanks to his manager’s contracts. Which is a good thing because Bad Blake is a hard drinking, chain smoking, has been musician living off his past hits. He can’t even finish a set without stumbling outside to hurl. He takes better care of his guitar than he takes care of himself.

Blake plays his old tried and true sets for fans that are blissfully unaware of his drunken mess of a life. He’s living out of his old beat up car driving all around the Southwest. His manager wants him to get back to writing some new material for his former backup singer Tommy Sweet who is now a big slick modern C&W star. Blake insists he should do his own album, but his reputation and creative slump keep the record labels at bay.

While playing a gig in Santa Fe, he meets Jean Craddock (Maggie Gyllenhaal) a reporter wanting to do a story on him. He is attracted to her as she is not the usual one night stand drunken floozies that populate his life. Jean is charmed, but cautious as she’s coming out of bad relationship and has a 4 year old son to consider. But Blake who had been married four times previously is charismatic, talented and wins her despite his drinking and poor hygiene. She knows what she is getting into, but the fangirl in her is floored when Bad writes a song while lying in her bed.

Jeff Bridges inhabits Bad Blake like well worn cowboy boots. You can practically smell the booze radiating in those close up shots of Bad passing out on the floor in his BVD’s.
The part of the incorrigible musician wrecking havoc on the lives around them, had been done before, but in Bridges hands you feel you are watching something new. Blake is a lone wolf; he doesn’t keep any ties despite his attempts to forge one with Jean and her son. He’s not sober enough to realize this until it’s too late.

Crazy Heart is from a 1987 book by Thomas Cobb. Written and director by first-time filmmaker Scott Cooper with music by T Bone Burnett and Stephen Burton. Jeff Bridges performs the original material full of twang and heart as if was truly composed by Bad Blake. Colin Farrell turns up in a cameo role of Tommy Sweet who turns out to be different than what one expects after Bad’s constant grousing on his former protégé. The duet they perform is a surprise and a delight. The soundtrack also features music by legends Waylon Jennings, Buck Owens, Kitty Wells, George Jones, Lightin’ Hopkins, Townes Van Zandt and others.

This is a sparse laid back tale of a used up beaten down but immensely talented performer that that is enhanced due to Jeff Bridges sensitive and unflinching portrayal. He deserves the accolades that will certainly be bestowed come awards season.
Review by: Reesa