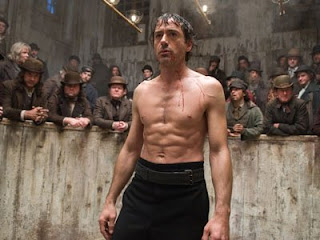 London in 1891 is full of unabated industry. It’s dirty, dingy and most likely just as odorous. Sherlock Holmes and Dr. Watson race through the streets in carriages to arrive just in time to stop Lord Blackwell dressed in a ritualistic cloak perform a human sacrifice. He’s put in custody of Scotland Yard and sentence to hang. Dr. Watson confirms his death. But now Lord Blackwell has escaped from his crypt.

Directory Guy Ritchie has put a different spin in this version of the often portrayed crime sleuth and his trusty sidekick. Gone are the earflap cap and Meacham pipe of Basil Rathbone. Dr. Watson is no longer the bumbling assistant. Robert Downey Jr, and Jude Law give the combo a great chemistry and friendship, equal in both wisecracking, fighting and intelligence. Watson is well groomed and organized but with a penchant for gambling. Holmes engages in boxing for money, not big on personal hygiene, and doing questionable experiments on Dr. Watson’s dog.

Holmes and Watson discover that Blackwood (Mark Strong) is involved with a secret society of government leaders dabbling in occult dark magic whose aim is control the world. Blackwell is leading a nefarious plot that involves a mechanical device and parliament. Irene (Rachel MacAdams), the only woman who has fooled Holmes in the past has been hired to pursue Holmes in an attempt to steal the device. Holmes must solve the mystery of Lord Blackwell’s rise from the dead, while also contending with the new woman in Dr. Watson’s life. Watson is moving from their apartment, and aims to propose to Mary Marstan despite Holmes’s subtle attempts to sabotage his plans. He also must save Watson’s reputation from declaring Blackwell’s death after hanging.

The authenticity of the sets and costumes bring you closer to what London must have been like in those times. The lighting and dark shadow enhances the rainy atmosphere of city highlighting the dirt and grime of the industrial plumes. The camera follows the clues like a CSI episode that Holmes will interpret by end of the movie. The pace is fast, full of explosions, fighting and clever dialogue that in like most Guy Ritchie movies is often hard to decipher. This will be a good DVD to watch several times to find new things you missed the first time around.
Review by: Reesa