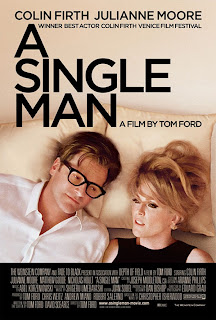 George Falconer, a 52 year old British college professor is mourning the loss of his long time lover Jim. It’s Southern California in 1962. He’s not allowed at the funeral. He’s only told of the accident by a cousin a few days after it happened. Based on Christopher Isherwood’s novel of the same name, the story takes place in one day as George struggles with his grief and contemplates suicide.

George (Colin Firth) is neat, tidy, and extremely organized. His suits are impeccable; his shirts in his drawers are folded neat and pressed from the dry cleaners. He says he doesn’t become George until he has washed and dressed to present himself to the world. He has lived with his architect partner for 16 years in a mostly glassed walled house in the suburbs. Their neighbors considered them “light in the loafers”. If you’ve seen Milk, you would know that gay couples could not have enjoyed the openness of a relationship as they do today. He can’t sleep and moves through his day with the regularity of habit. We follow him through his routine while he has these chance encounters with neighbors, students, a guy trying to pick him up at the liquor store and buying bullets for his gun. His friend Charley (Julianne Moore) has invited him to dinner and drinks which he accepts. Before he goes he lays out all his things he emptied out of his safety deposit box. His life insurance policies, notes to his friends, a nice suit and instructions on how to knot his tie. He becomes frustrated on where and how to shoot himself without making a horrible mess. He ends up going to Charley’s house where she has dolled herself up perhaps trying to seduce her one time lover. Afterwards George ends up going back to the bar where he first met Jim and encounters Kenny (Nicolas Hoult) one his students who empowered by his earlier class regarding confronting your fears had admitted stalking George. His youth and puppy dog hero worship intrigues George who spontaneously joins Kenny in a swim in the ocean. When they return to his house, George seems to have come to a decision and disposes of his letters. The ending which I will not spoil, stays true to the book but will still come as a shock and feel completely unfair.

Directed and written for the screen by fashion designer Tom Ford, who financed this project on his own for his directorial debut. It is beautifully photographed in tinted hues, focusing on each frame like a Vogue magazine layout. The 60’s never looked so good. George’s dreams of drowning are enveloped in sadness as Ford’s camera lingers on the male form as an art piece. Colin Firth gives a sensitive nuanced performance, holding tight while he relives the memories of his relationship with Jim. After years of seeing Firth romp in Mama Mia and Bridget Jones, it’s wonderful to see him play such an inward character. Julianne Moore never ceases to amaze. She’s such a fearless actress who is not afraid to bare all those freckles or her age. While this movie shows promise for Ford’s future as a director, it’s moody and melancholy. It’s only claim to fame will be the award attention given to Colin Firth this year.
Review by: Reesa