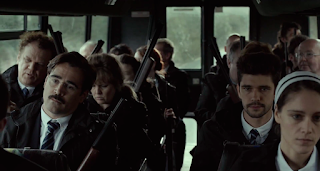 The Lobster is a dark comedic science-fiction tale directed by Yorgos Lanthimos who also wrote it with Efthymis Filippou. It is frankly bizarre and entertaining, winning the Jury Prize at the 2015 Cannes Film Festival. It's offbeat and somewhat deadpan humor may not sit well with most typical movie goers at a metroplex, but for those who want a bit of a different love story that confronts dating, power structures with a satirical bent that is surreal and disturbing.

In this alternate dystopian world, the rules of the City requires that single people spend 45 days at the Hotel where they have to find a partner. Those who fail at the end of their time limit are turned into the animal of their choice. David (Colin Farrell) whose wife had left him, arrives at the Hotel with his brother who had been turned into a dog. The Hotel Manager (Olivia Colman) explains the rules to David, takes his preferences of being straight or gay (bi is no longer an option), and what kind of animal he would chose, which he says “lobster”. The residents at the hotel are taken to the dining area which are separated with the singles sitting at long row of tables. Those who found a potential partner are allowed to sit together in another room. He befriends two men who he identifies as Lisping Man (John C. Reilly) and Limping Man (Ben Whishaw) who have been there longer to show him the ropes and discuss the possible women who are available.

The residents of the Hotel can also extend their stay by hunting escapees, the Loners who live in the surrounding forest. They are shot with tranquilizers, what happens to them is not explained. The most cold blooded woman at the Hotel (Angeliki Papoulia) has the record of captures because no body really wants to partner with her. Couples usually have to find something similar with each other to become compatible. Limping man smashes his nose against hard surfaces to feign nosebleeds to win the affection of a woman who suffers nosebleeds. Heartless woman decides she is matched with David when she feigns choking and he doesn't respond, but he realizes she is crazy and escapes the hotel. In the woods he joins the Loners. The Loners are forbidden romance which is punishable by violence. David who is near sighted begins a relationship with a near sighted woman (Rachel Weisz) and they try to keep it a secret with sign language. The Loners go on covert missions to the city and launch raids on the Hotel. The movie sort of gets muddled towards the end, but the last scene is a kicker and is kept ambiguous.

Colin Farrell is really paunchy and odd. He's numb with sadness, and his communications skills are pretty dim. He conveys the uncomfortableness of trying to maintain a working relationship with another human being. In fact everyone partnered seem only to be by one common element like David's nearsightedness with his Loner lover. The colors, pacing and direction are all planned to keep you sort of off kilter. You may leave wondering about your own partnerships and what kind of animal you would be.
(Review by reesa)

Email ThisBlogThis!Share to TwitterShare to FacebookShare to Pinterest
Labels: The Lobster review