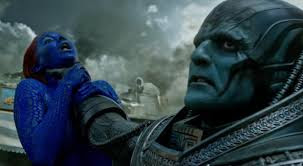 The first X-Men filmed in 2000, now number nine movies including the spin-off's for Wolverine and Deadpool, with more to come in the future. Obviously the series has to adjust to aging actors by exploring earlier time lines. The first films explored the X-Men in present time, then it went back in time. The new film is also from the past where we learn the origins of some characters and even how Professor Xavier looses his hair. Directed once again by Bryan Singer and written by Simon Kinberg, the movie will be fun for die hard fans, but for those not it will be hard to keep track of the who's and why's.

We are also introduced to the “villain” of the piece, En Sabah Nur/Apocalypse (Oscar Isaac) living in ancient Egypt with his four Horseman of mutant enforcers. He's trying to change his body to preserve his immortality, but some of his worshipers try to kill him and destroy the temple before the transfer is complete. The Horseman create a shield around the Sabah Nur which keeps him entombed over the years until Agent Moira MacTaggert (Rose Bryne) discovers a cult worshiping him. Sabah Nur escapes, walking around modern day Egypt assessing the world around him. He enlists the help of mutant pickpocket Ororo Munroe who can control the weather. With Sabah Nur's help, he enhances her powers making her Storm, one of his new Horseman. He also recruits Psylocke (Olivia Munn) and Angel (Ben Hardy) who have some anger issues already. But his main man is Magneto (Michael Fassbender) who is upset after losing his wife and child while he was hiding his identity while living a normal life in Poland.

Meanwhile, the parade of mutants are quickly reviewed and introduced again, Mystique (Jennifer Lawrence) who is out rescuing mutants like Night Crawler (Kodi Smith-McPhee). She takes him to Xavier's new mutant school where Beast (Nicholas Hoult( is a teacher who build things for troubled students. Like new mutant Cyclops (Tye Sheridan) who connects with Jean Gray/Phoenix (Sophie Turner) as being the most feared mutants in the school due to their lack of power control. They become aware of the new power stirring when Apocalypse almost destroys the school. And they have to unite to once again save the world.

The action sequences are better than usual thanks to the upgrades in technology, but it's still CGI overkill. All the mutants get a little screen time to shine so you will remember them in the upcoming films. The trouble is the films cuts from one thing to another too quickly. Besides the numerous characters thrown together, we get a taste of an early Wolverine in one sequence, all passing too soon. The origins of En Sbah Nur and how he came to be is never explained, nor why Magento joined his Horsemen. Big gaps and messy story opening too closely to the more superior Captain America. People will still see it.
(Review by reesa)