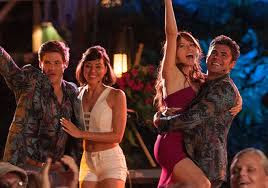 Opening:
If you need a wedding date, just go to Craigslist. There is no punchline here just follow the footsteps of the main characters and you will get a couple of hotties. Actually since its Craigslist, you might up with a broken lamp and a bar stool as dates instead. Let’s get reel and break this down.

Plot:
Two brothers place an online ad to find dates for a wedding and the ad goes viral.

Pros:
At times, it can be filled with hilarious one-liners that would catch me off guard and almost make me cry. And with this, it’s very entertaining from start to finish; however…

Cons:
…most of the humor falls flat for me and I felt like they were trying too hard to be raunchy. The story doesn’t really help the comedy situation either because it’s very average, predictable, and kind of fall itself. The director is a first-time director to big budget films and he does fine, but nothing really exciting or new to the comedy genre.

Pros:
Zac Efron is having a rough year with the horrendous Dirty Grandpa and the mediocre Neighbors 2: Sorority Rising but he is slightly better in this. I think what works well is that he and Adam Devine have great chemistry and I wouldn’t seeing them together again the future. The improv game is strong between the two and that is what works best in the movie.

Cons:
Everyone is fine but it’s nothing to praise about. It was nice to see Anna Kendrick in a raunchy atmosphere. I have always liked her and she need to do more movies like this.

Pros:
It’s fine. There is nothing about this movie that screams visual brilliance. The resorts look like a beautiful brochure but that’s about it.

Pros:
It is entertaining enough to make the hour and a half runtime fly by. As bland and predictable as the story is, the atmosphere and characters can guide you to the finish.

Cons:
If you don’t like raunchy comedies, then will not be for you and have the pace of a turtle with broken legs.

Overall:
This is an average raunchy comedy and nothing more. I was entertained and it was sometimes laugh-out-loud hilarious. But to be honest, I won’t want to watch it again. If you want raunchy counter-programming to The Secret Life of Pets this weekend, this is your pick.