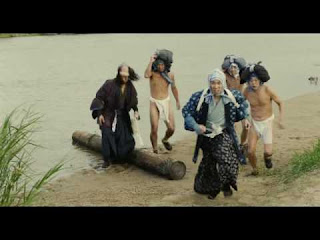 The opening night film of the 2016 Asian Film Festival Dallas is the followup to the successful 2014 Samurai Hustle continuing with the adventures of the Yunagaya Domain's lord and samurai warriors as they return from one of their Sankin-kotai (required ritual visit to the shogun). Coming home relaxed and pleased with their visit they receive word that an insurrection by some "farmers" that has devastated the rice crops. They must now rush home by foot in a couple of days before the inspector arrives.

Kuranosuke Sasaki plays the good natured Lord Naito who is looking forward to getting married to Osaki (Kyoko Fukada), a bar maiden with whom he fell head over in heels with in the last film. She is a bit insecure being from a poor and unscrupulous background that may bring shame to her future husband. When the mismatched warriors, who had forged a strong bond in the previous movie, decide to leave everything behind, hike up their hakamas and run. They must also once again fool the postal station guards by hiring marchers to make 30 men look like 100 which is the accepted amount for a domain of their size or they will risk shame on their domain. Along the way they find out warrants have been issued for their arrest and for inciting the insurrection. They are also are waylaid by an opposing group of samurai that includes an old compatriot.

They return back to the castle to find their clan has been dissolved and replaced by another. Some of their people have been imprisoned, the field and stores of food destroyed. The instigator of their bad luck is the recently released from house arrest Councillor Nobutoki who still harbors a grudge against the pauper lord for foiling his plans in Samurai Hustle 1 and just for being poor. In fact Nobutoki has more ambitious plans. Fortunately the Edo magistrate Ooka suspects something is amiss.

The relationships of the Yunagaya clan is what gives this film some heart. One doesn't necessarily need to see the first, but it helps, and its a good. The sword fights are pretty impressive. Especially the ending battle pitting the illustrious seven plus monkey against an army of 1000. Each of the lovable characters are given a chance to shine. The bad guy is fabulously sinister with blue eye shadow. Don't worry if you missed the opening night screening. It will be playing again on the last day of the festival.
(Review by Reesa)