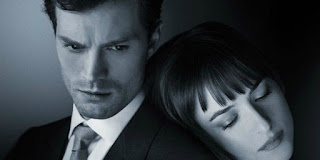 The acclaimed movie adapted book series is back with it's second movie things get more racier since Christian wants Ana back. Besides the hot on screen chemistry of Dakota Johnson and Jamie Dornan the movie moved with a fast pace but lacked the intensity I was hoping for from director James Foley is known for. He does murder mysteries so well making them tense and wanting more, unfortunately this wasn't his best work in my opinion. He did television shows like "Hannibal", "Twin Peaks" and recently "Wayward Pines" not to mention movies like "Fear".

Even though I girlishly squealed in delight at all the romantic scenes and blushed at the sex scenes something seemed off in this sequel, I wanted to see more. At only 118 mins it wasn't a roller-coaster of emotions like the first and was more like adversary after adversary was coming for them but you already knew that and I haven't even read the book. There was very little shock value more like soft core titillation. The story felt rushed and I just have an inkling that lots of stuff was left out. It was like this is the movie you watch to get to the next movie. There were so many holes in the movie that needed to be explained.

The cinematography was beautiful to make up for the lack of urgency, but definitely beautiful scenery. The costumes were impeccable, especially the silver gown Ana wears to the masked ball and all the lingerie she was wearing was beautiful. The acting was well done and well casted like Eric Johnson as Ana's boss was so well done even I wanted to kick his ass. Rita Ora as Christian's sister was cool I love her music work and her move to acting was a wise choice. Marcia Gay Harden as Christian's mother is a saving grace she always a incredible actress. Kim Basinger was the dark horse didn't see that coming.

For a second movie it was pretty tame to me because Christian's character has changed. Overall the movie was good even though I expected more. I hope the next film brings more drama to the screen instead of just filler. Even the crash seemed meh, like we all knew it was gonna happen, I don't know if it's worth the ticket maybe next time.
(Review by Samantha Leggio)