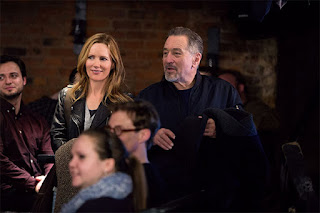 This Joke is Half Baked

Opening:
As long as you can be better than De Niro’s last outing Dirty Grandpa then you are doing something good with your life. I was looking forward to this because it did look like De Niro was trying. I was half right. Let’s get reel and break this down.

Plot:
A look at the life of an aging insult comic named Jack Burke.

Pros:
The director looks like the type of guy who tries and puts energy and passion into his projects. With that being said…

Cons:
The story and overall direction itself is flat and never tries to be anything more than what it is. No risk is taken and just seems like a very safe film. The story of a comedian is supposed to have a balance of comedy and tragedy, which this film has, but never feels smooth and always feels like two separate movies. The comedic scenes do hit for the most part but when it switches to the more emotional moments and reveal some character depth it just doesn’t gel well. Speaking of characters, the two leads are one-note and I honestly didn’t care about their relationship. When I say one-note, the characters don’t have any depth despite their “moments” where they reveal their past. Every other character doesn’t make any difference or have no weight to the actual story. The direction of the film feels like (as pointed out by fellow critic Cary Darling after the screening) a sitcom with the jazz saxophone as transition music and almost reeks of a parody of itself.

Pros:
Despite the bland characters, I do appreciate the performances. De Niro has the sharp, wit, and charisma of a stand-up comedian and does provide some moments of why he is a good dramatic actor. Leslie Mann has the sweetness and bite of her character and she portrays it well. Danny DeVito and Harvey Keitel are nice additions but you could honestly get anyone for their roles.

Cons:
For a film shot in New York, I never felt the beauty or magic of New York scenery and life. It was a bit bland to me and didn’t supplement any pop to the story.

Pros:
For its near two hour runtime, the stand-up scenes do provide a breath of fresh air and energy to keep it going.

Cons:
On the flip side, the two hours do feel dragged out and you can feel the weight.

Overall:
Not the worst thing I have seen De Niro do but this would be a strong recommendation for a iTunes rental or something. Thank goodness we can put Dirty Grandpa behind us and forget about it.

Posted by Dallas Movie Screenings at 11:16 AM