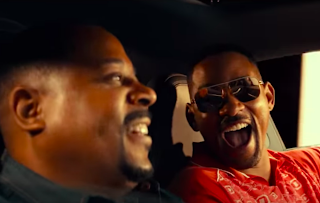 The trend of revamping long-stagnant franchises continues with “Bad Boys for Life.” Will Smith and Martin Lawrence return to their characters of Mike Lowrey and Marcus Burnett, respectively, for this third outing though director Michael Bay is out. The directing is handed over to the duo of Adil El Arbi and Bilall Fallah. I’ve never heard of either director; I’m guessing others will probably not be familiar with them either. Not that this is a bad thing, a fresh perspective could be good for an aging franchise that hasn’t produced a movie in nearly 20 years.

Alas, “Bad Boys for Life” feels like more of the same. It’s just another action movie. Directors Arbi and Fallah do little to spice up this action flick. There are some interesting visuals, slow-motion shots that highlight the action and give it a glitzy commercial-like appeal, but that wasn’t enough to keep this viewer interested. Arbi and Fallah also have a fixation on using multiple establishing shots of the Miami area between scenes. These don’t add much of anything to the work and quickly grow stale.

Arbi and Fallah have problems balancing between the multiple tones of the movie. Is this comedy or is this action? “Bad Boys for Life” wants to be both but rarely do they coincide. They remain separate, never merging into a cohesive blend. Tonal shifts are jarring, varying from brutal violence to goofy comedy. Arbi and Fallah seem more comfortable with the brutal bits. The fight scenes are graphic, featuring, among other things, stabbings and impalements, and they are effective.

On the comedic side, the majority of the jokes don’t land. These elements are forced and don’t flow as naturally as the action scenes do. There are some funny bits, mostly toward the end where the movie seems to temporarily find some sense of rhythm, but mostly it’s on the dull side. Much of the humor involves how much older Lowrey and Burnett are now and their different point of views on what their lives should look like now. Lowrey wants to stay a bad boy for life while Burnett wants to settle down and retire.

Will Smith seems to have an easy time sliding back into his role as the egotistic Detective Lowrey. His performance does a lot to carry the movie. On the other hand, Martin Lawrence seems like he’s struggling. He hasn’t been in very many movies lately so maybe his acting is a little rusty. There’s a “Bad Boys 4” (what a surprise) in development so maybe he’ll give a better performance there. Here, his delivery is off. He sounds like he’s just reading his lines. Despite this, the pair still manage to make a compelling comradery.

The movie explores how Lowrey and Burnett’s, mostly Lowrey’s, methods clash with the modern methods of police work. A team of young detectives (Vanessa Hudgens, Alexander Ludwig, and Charles Melton) is introduced who work with non-lethal weaponry and high-tech gadgets. These are likable characters, and one of the movie’s more intriguing elements, but they feel like they’ve been inserted to pull in and connect with the younger audience or possibly as a test run for some potential spin-off series.

“Bad Boys for Life” seemed to run longer than its two hours, leaving me more than ready for it to be over. While there are some intriguing and surprising elements, this one didn’t work for me.
(Review by Bret Oswald)