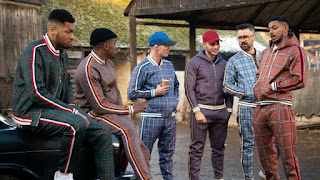 “The Gentlemen” finds director Guy Ritchie returning to the frenzied style of his earlier films, “Lock, Stock and Two Smoking Barrels” and “Snatch.” Although this film isn’t as chaotic as either of those movies, it features a similar rhythm and the same snappy dialogue and violently humorous situations that defined those movies. Here, Ritchie is more restrained. He orchestrates the movie in a way that allows him to focus on his style without detracting from the story, which gets a little overly complicated at times.

In "The Gentlemen," Matthew McConaughey stars as drug kingpin Mickey Pearson. Mickey is looking to sell his cannabis business, a vast empire he's built from the ground up that spans across the UK. After snubbing tabloid magazine editor Big Dave (Eddie Marsan), Mickey’s desire to get out starts a string of events that put a hinge on leaving the business. Big Dave has hired Fletcher (Hugh Grant) to follow and spy on Mickey. Fletcher's decided to use his findings for blackmail. Seeing the opportunity for a large payout, Fletcher confronts Mickey's right-hand man, Ray (Charlie Hunnam), breaking into his house and presenting him, in a cheeky touch, with a screenplay that chronicles the events that have transpired until that point. It's through this presentation that the audience watches the world of Mickey Pearson unfold and fall apart.

Ritchie covers a lot of material in a short amount of time, making the beginning a little difficult to follow. There are multiple characters to introduce, each with their own background story. It's quick and rapid-fire presentation can leave the viewer feeling uncertain about many of the characters and their connection to each other. It doesn't help that the movie is presented out of sequence, although, this isn't anywhere near as confusing as it could have been. There is also a subplot or two that don't completely mesh with the film. They initially weave into the story with a purpose but stick around after that purpose is filled, leaving the viewer puzzled as to the reason for their continued inclusion.

After a shaky start, “The Gentlemen” starts to find a groove. Ritchie does a good job handling the material, a zippy crime caper that's light on its feet despite its brutal violence and crass language. As the movie progresses, things start to become clearer as the viewer begins to piece the information together. The film is funny, not always laugh-out-loud funny though it does deliver some of those scenes too. The actors are completely absorbed in their roles, creating a cohesive, energetic ensemble. These characters may not be totally realistic, performances border on the side of over-the-top, but that’s part of the fun. Hugh Grant and Colin Farrell are the scene stealers. Grant's character is cheeky and more than a little awkward, playing against his usual type of suave and cool. Farrell plays a character named Coach whose students make the mistake of breaking into one of Mickey's locations and stealing his product. His dialogue is some of the best in the movie. The character is quick on his feet, fighting with his mind more often than with his brawn.

"The Gentlemen" barrels along to an almost satisfactory conclusion. The production design is sleek and well-polished, sequences are nicely photographed and finely edited together. Unfortunately, Ritchie sees fit to throw in too many twists, turns, and double crosses in the film's final act. The final twenty minutes is a bit too much, taking the movie on a nosedive that leaves a bad taste in the mouth as it tries too hard to show how clever it is. While the finale could have used some more fine tuning, as a whole, "The Gentlemen" is a lot of fun.
(Review by Bret Oswald)