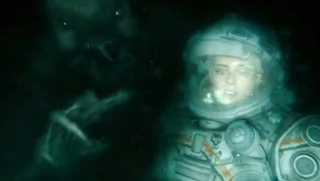 January is like the killing fields for horror/thriller movies after the holidays while we wait for the award shows and watch football. So it's no surprise to find that this dark, claustrophobic deep sea entry will probably be universally labeled as waterlogged. Kirsten Stewart, looking bad @ss with a blond buzz cut gets top billing is mostly known for her Twilight days has been making good choices (except for Charlies Angels). The film was shot 3 years ago by director William Eubanks with a screenplay by Brian Duffield and Adam Cozad can't quite seem to keep this project afloat. Plot points seem to have been pulled from Alien with bits from The Abyss and monsters from Aquaman. However, it's still a non-stop somewhat satisfying action movie for it's 95 minute running time.

For some unexplained reason, corporate greed has decided to build drilling platforms in the Mariana Trench almost 7 miles from the surface. If anyone watches those Ancient Alien shows on the History Channel, then you know that there are some scary things living below the ocean that could have extraterrestrial origins. These huge deep sea structures house hundreds of support teams who lose all sense of time and daylight. The movie starts immediately with some disturbing noises and dripping water before things start to explode and water comes rushing in. Mechanical engineer Norah (Kirsten Stewart) is in a race to seal off corridors while trying to find survivors to make their way to the escape pods. Vincent Cassel as the Captain, T.J. Miller as Paul, Jessica Henwick as Emily, John Gallagher Jr. as Smith, and Mamoudou Athie as Rodrigo are the handful of characters tasked with trying to find a way out. Since most of the station is badly damaged and the pods are gone, the Captain says the only way out is to walk the bottom of the ocean to the next drilling station a mile away. It's then that they begin to realize they are not alone.

As to be expected, characters are like the red shirts on Star Trek. Expendable. Fortunately the characters are not written making stupid choices. After all they are supposed to be experts in their fields and should be somewhat level headed to have been chosen to work at this deep sea station. Emily the biologist has some melt down moments, but she manages to keep going. Paul is the Bill Paxton of the crew with his irreverent wit. Stewart is Ripley ending the film in her underwear. As for the monsters in the deep, they are creepy, full of teeth and no biological reason why they exist, how they got there and where they plan to go now they have been released. The environment is like a space movie where there's no where to go when things go bump in the night. One is stuck with tons of water all around requiring to be pressurized every time you enter a station. There isn't a whole lot of character development with hints of everyone's life above water, interspersed with techno babble. It's really not necessary since their struggle to stay alive is the main point of the movie. The action keeps you from thinking too deeply about it. It's forgettable but worth the popcorn.
(Review by reesa)