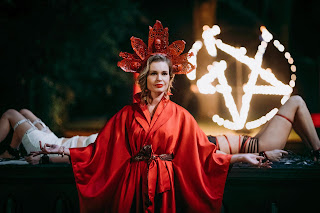 Normally, I don’t do horror, but this one falls into a variety of categories I do cover, namely the horror-comedy hybrid of which I am a big fan of. Some examples of this are Peter Jackson’s “Dead-Alive,” (1992) Edgar Wright’s “Shaun of the Dead” (2004) and Dan O’Bannon’s “Return of the Living Dead” (1985).

“Satanic Panic” was actually shot here in the Dallas area, hence another reason why I am covering this.

The main stars of this tale are Hayley Grifith and Rebecca Romijn. Griffith is the new employee on the beat, a pizza delivery girl who lands into some unexpected territory on her route. Rebecca Romijn is Danica Ross, the leader of a coven of witches who worship satan and everything evil. In their wisdom they would like to conjure up the dark lord to reign hell here on earth.

Griffith’s Sam Craft is also in demand with the witches because of her virginity status. This one receives bonus points for some of the witty writing.

I watched “Satanic Panic” on the SHUDDER app.

“Panic” also falls under the Fangoria banner, since they actually produced this fun piece of forgettable fodder.

Those who are in the entertainment business know about Fangoria, since it was a regular mainstay of comic book collectors and the like.

So readers know, Fangoria was a big deal throughout the 1980’s era, when Freddy Kreuger (“A Nightmare on Elm Street” series and Jason Voorhhees (“Friday the 13h”) were the mainstays of the horror world. They also covered popular movies, like David Cronmberg’s “The Fly” (1986), “Fright Night” (1985) and Wes Craven’s “Deadly Friend” (1986).

Directing chores for “Panic” were handled by Chelsea Stardust. She was involved with horror entries such as “Sinister” in 2012. Her lengthy resume goes back even farther, having worked as assistant Judd Apatow’s assistant on 2009’s “Funny People.”

She worked on various horror-suspense entries like “Sinister” in 2012 a well as “The Purge” in 2013.

Stardust seems to be a smooth fit within the horror genre, having worked with producer Jason Blum on a variety of projects, including the Kevin Bacon led “The Darkness in 29016.

Writing for this intriguing tale were scribed by Grady Hendrix, who even pokes fun at the fact all Sams need to stick together.

Although not a great movie by any means, “Satanic Panic” does an adequate job of keeping the viewer entertained for a brief spell.