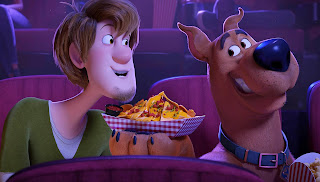 Scoob! revives the franchise but falls short for both kids and adults.
It’s been some long, quiet years since the last Scooby-Doo film, Scooby-Doo: Monsters Unleashed, which was a live-action film produced by Guardians of the Galaxy director James Gunn, was released in theaters back in 2004. Now, Warner Bros. stated that the reboot of the franchise went into effect, bringing down some childhood thrills and chills that kids and adults can engender nostalgia in front of their eyes on the big screen (or as one says “television” before it became a major thing in the fifties).

The Scooby-Doo franchise was founded by MGM animators William Hanna and Joseph Barbera under their own production company, Hanna-Barbera, an animation studio that was established in the late 1950s before being sold to Taft. The animation company was later acquired by Turner Broadcasting System and, following the merger between Turner and Time Warner, the studio was absorbed back to Warner Bros. Animation as a holding company.

Here in the film, it starts where the origins of how Mystery Inc. has been established with Shaggy as a kid who befriends a dog that is later named Scooby. After becoming best friends, they both come across the three kids: Freddie, Daphne, and Velma for the first time. They later run into superhero Blue Falcon whose plan is to capture his arch-enemy Dick Dastardly and it is up to Scooby Doo and the gang to stop Dastardly from his evil plan.

Taking inspiration from the classic Scooby-Doo television shows, director Tony Cervone knows the tips and tricks on how the film flows smoothly for the storylines and the characters’ personalities to capture each moment based on every show of the franchise, including the shows’ nostalgic episodes. The directors and the crew really outdid the CGI-colorful animation tackling around scene to scene with canine slapsticks, heroic James Bond-typed adventures, and encountering dangerous, risky journeys ahead. Cervone, along with the producers Pam Coats (Disney’s Mulan) and Allison Abbate (The LEGO Movie), really wanted to make this as some sort of a “challenge obstacle” beyond the film’s and the characters’ focus on this mysterious story. It takes much commitment on the story development and more Scooby-Doo influential episodes to watch in order for the film to cinematically create the perfect tone and the beatable, pricy outlook for the entire film as a whole.

Aside from this, the cast of the Scooby-Doo gang includes Will Forte as Shaggy, Zac Efron as Fred, Amanda Seyfried as Daphne, Gina Rodriguez as Velma, and Frank Welker who made his sensational return to voice Scooby. With Zac Efron voicing as Fred, this marks the first time Fred is not voiced by Frank Welker himself not counting the live-action films. Similarly, what’s very hard to believe is that veteran Scooby-Doo actors Matthew Lillard and Grey DeLisle didn’t appear to reprise their roles of Shaggy and Daphne respectively.

Also appearing in the film are Mark Wahlberg (The Departed), Kiersey Clemons, Ken Jeong, Tracy Morgan, and Harry Potter star Jason Isaacs who provide the voice of Dick Dastardly, the main villain of the story.

While the film is enjoyable to watch, there are some downfalls about this piece. The plot doesn’t provide enough details compared to the television shows as well as not bringing the old-school 90s and 80s flavor to the party while the script-writing seems very unfitting and completely filled with lazy-writings while trying to make a film that echoes the classic and modern day shows nowadays. Like those two live-action films, which received negative reviews from critics despite the box-office successes, the film did not save them from being a great film series nor redeeming itself as a good movie. Even, the newer cast playing as the Mystery Gang didn’t help much as the casting strongly ruins the originality from the franchise, though the filmmakers manage to make up for that by securing the voice-actor Frank Welker to return as Scooby-Doo as well as working things out with the characters’ personalities as friendship becomes the main theme and the central point for the film.

On the side note, “Scoob!” is a bit okay but isn’t as good as the classic series nor the modern sitcoms that was aired on Cartoon Network but it certainly is a fun-filled adventure with canine slapsticks and loads of heroic laughter for kids and adults to enjoy while in quarantine. I believed the director over did it, but Frank Welker did a bang-up job on his role as Scooby. I didn’t like it or hate it, I just wanted to see how this film turned out to be. It’s really hard to tell whether it’s a good film for adults who grew up watching Scooby-Doo in their lifetime, but for the kids, surely yes. To make this simple, you can watch it, but if you don’t like it, then go back to watch the classic ones I mentioned to make up for that. I think this 90-minute-movie would be a rental rather than owning this on Blu-ray/DVD when it comes out. Just to let you know, the film is up on VOD now.