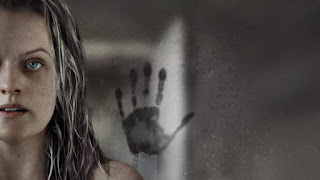 The star here us Elisabeth Moss, who viewers might recognize from her role on television’s “Mad Men,” which ran o cable in the early 2000s, 2007-2015 to be exact. A couple of years back she was part of the female led ensemble that was “The Kitchen” (2019).”

She also had a small yet memorable role in director Jordan Peele’s “Us” from 2019. Currently, Moss is starring on “The Handmaid’s Tale,” which is currently in its fourth season.

Going back to Whannell’s “The Inivisible Man,” she plays Cecilia Kass, who leaves an abusive ex-boyfriend, Adrien Griffin (Oliver Jackson-Cohen.) This tale contains some very intriguing pretzel plot twists, something atypical of a genre picture of this type. Usually viewers are forced to endure some piece of hokum and derivative mess.

She has a younger sister she confides in, one who know of her ex and the baggage that came with the over demanding lout.

“The Invisible Man” delivers in every single department because there is not an overabundance of “boo” scares or “bagul jumps. It is a finely crafted and nuanced storytelling technique, one that realizes not everyone is a dolt or an idiot. ” This movie, for all intents and purposes is just a well orchestrated tale of deception filled with some genuine scares and terms of suspense.

Also commendable is Aldis Hodge as James Lanier, a family friend of Kass, who shares a close relationship with Cecilia. He also has a daughter named Sydney (Storm Reid, “A Wrinkle in Time” 2018).

She gets along well with Cecilia, thus ensuring their strong bond and connection with one another.

Also woven into the story is a subplot involving Tom Griffin, the younger brother of the now deceased Adrien Griffin.

“The Invisible Man” is worth a definite look, since it takes some older themes and placates twists them for just the right sweep of modern technology.