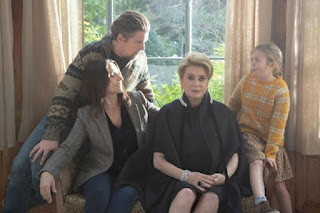 THE TRUTH
**½ (out of ****)
The Truth represents Japanese director Hirokazu Kore-eda’s take on the type of family drama we are more accustomed to seeing from French filmmakers. It involves an upper-class family (in part, a French one, bolstering that expectation), long-held secrets, and boiling resentments, leading to a climax in which most, if not all, of these things come to an explosive, melodramatic head. In the fashion typical for Kore-eda, though, everything about the film – up to and including the eponymous revelation – is dialed back from a ten to roughly an eight on that scale of melodrama. This is a welcome choice, as the details of the story (written by the director) are far from subtle. What doesn’t help is Kore-eda’s insistence upon simplifying every thematic concern with a tidy conversation.

Of central concern is Fabienne Dangeville, a legendary actress who has recently become resigned to the twilight era of her career. She once won the highest honor a leading actress can received from the French Academy, and now, she is preparing for a major role in a time-twisting sci-fi blockbuster that she admits “won’t be a great film” (which, of course, is the equivalent of saying she thinks it’s going to be pretty bad). Fabienne is played by Catherine Deneuve, a legend in her own right with a career that spans all the way back to the French New Wave. Furthermore, Kore-eda pairs the veteran with Juliette Binoche (a legend-in-the-making in her own right) as Fabienne’s semi-estranged daughter Lumir, a screenwriter now working in Hollywood.

If this isn’t enough of a casting coup, the director pairs two great actresses with Ethan Hawke, among the best of a certain generation of American performers, as Lumir’s actor husband Hank. The pair have arrived, along with their daughter Charlotte (Clémentine Grenier), in the aftermath of a tell-all autobiography penned (in part) by Fabienne, opening the door on a life that was riddled with scandals on and off the sets of her various movies, and on the eve of shooting the big-budget production, whose star Manon Lenoir (Manon Clavel) is open about having been influenced directly by Fabienne. Lumir has every reason to believe that the book is pure bunk, not least because of the return of her even-more-estranged father Pierre (Roger Van Hool), whom Fabienne claims to be dead in the book.

The concept of Fabienne’s struggles with telling the truth is central to Kore-eda’s screenplay, and to the film’s credit, it doesn’t push this point too hard. Loud arguments and quick cutting would be death to this story of half measures and whispered lies and intentional evasion. In that sense, the actors complement the material entirely: Deneuve is superbly indifferent before deeper shades reveal themselves. Binoche communicates a lot of pent-up strain. Hawke is solid at portraying a man who wonders what he’s doing here and why he’s been on the wagon for so long, and for her part, Grenier is a complete natural, playing a precocious child without coming across as precocious herself.

Eventually, the melodrama gets the better of Kore-eda, though, even as the treatment hints at something more nuanced and considerate. The details of the movie’s plot begin to merge with the thematic content of the movie-within-the-movie being made by Fabienne, which concerns the building relationship between mother and daughter as they move through time and space. This layer of commentary is one too many for the director, who does not seem to trust the integrity of his characters’ development enough for these issues to evolve naturally. The Truth unfortunately represents a minor work from Kore-eda. It begins as a thoughtful rumination on family, and it moves forward with familiar ideas about how to deal with the emotional upheaval of simple, decent honesty.
(Review by Joel Copling)