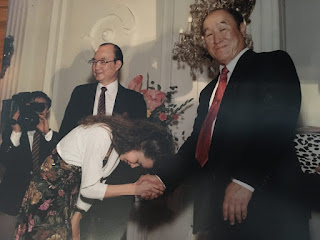 BLESSED CHILD
*** (out of ****)
The question of objectivity for a documentarian is dismissed almost immediately in Blessed Child, a brief but affecting account of a young woman’s escape from the cult that, in part, was responsible for her being on this earth. The cult in question is the Unification Church, created in 1954 by Moon Sun Myung, a Korean-born Christian convert. The story goes that Moon was visited by Jesus, who asked the young man (16 at the time) to finish the work he left upon crucifixion. That meant, of course, that Moon was to gather followers en masse. The group marriages, sometimes unifying pairs of people by the dozens, came later on. That’s where director Cara Jones’ story begins.

It means that this documentary is the definition of personal, and there are times when the movie reminds of a therapy in the way Jones directly confronts her troubled past, whether through interviews or visiting the church while a wedding takes place. Jones never anticipated that she would find herself in the position depicted in the film’s framing device. Years after her own marriage fell apart, she is taking measures to ensure that having a family is not out of her grasp – freezing eggs until she settle down with the right partner. The rest of Jones’ movie is devoted to telling her story, as well as that of the church, in three parts. This isn’t the most adventurous route, but it does pay dividends.

When it comes to the church itself, that story makes up the film’s second segment, and if there is one shortcoming in this documentary, it’s that Jones doesn’t go much further than detailing what the first paragraph review already did. The extra tidbits touch upon the church’s move to Tarrytown, New York, and Moon’s various scandals, from a tax fraud case to infidelity. Nothing of real insight comes from this part of the film, though that might be because of Jones’ real intentions. Much more important to the director and us is the story of how her family – father Farley, mother Betsy, and brothers Bow, Matt, Harvet, and Farley Jr. (those latter two not featured in the documentary in any meaningful way) – came to be in the church.

The answer to that lies with her father, who had survived a childhood of increasing disappointment and fallen in with the church’s theology. Moon was a father figure to him when he had no other people, and one of the many complicated and uncomfortable truths confronted by Jones in this documentary is the fact that her parents are still members of the church. That is especially complicated when it comes to Bow, the director’s brother, who realized early in life that he was gay. Sexuality that deviated in any direction from a traditional view was (and still is) firmly outlawed, and so Bow’s only recourse was to attend a conversion therapy event hosted by the church. He remains unhappy with his lot.

We also learn about how Jones herself became disillusioned with the church. It was around the time of her first marriage, which happened early enough that she went from the ceremony to college. Her then-husband, meanwhile, went off to do ministry work for the church, much like Betsy was absent for the first two years of her daughter’s life. This left the young newlywed to a college experience that followed years with no socialization at all. It led to parties and infidelity of her own, and by the time the scandals surrounding “Reverend Moon” (as he was known by family and followers) were unveiled, the prospect of remaining was, by then, unrealistic and toxic.

Jones recounts all this in only 73 minutes – minus credits – which means that she must cut to the quick with efficiency and without wasted time. It does mean that much of the record feels rushed and a bit underdeveloped as a historical account, which is not insignificant when it comes to analyzing this film as a document. Where it overcomes that disappointment, though – as well as its rudimentary style and approach – is in its status as an emotional release for Jones herself. That’s where Blessed Child gets its power. Jones has left that life behind, but she still has ties – personal and familial – to a controversial and phenomenally awkward past. Some of those are going to be impossible to sever.
(Review by Joel Copling)