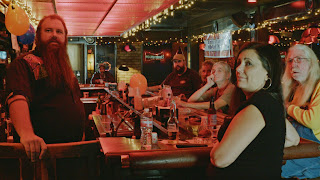 BLOODY NOSE, EMPTY POCKETS
**** (out of ****)
It isn’t even remotely clear what Bloody Nose, Empty Pockets is. The film comes from veteran sibling documentarians Bill (IV) and Turner Ross, and it depicts the final operational night of a Las Vegas dive bar, as patrons and at least two members of staff gather to commemorate it, commiserate about their shared experiences, and drink away the night of the 2016 election. It should be noted that the said pending election barely factors into the proceedings here, and even though there is a television in the place, it’s always tuned into something else (sometimes to the point of self-parody). Nevertheless, one truth gotten to by the Rosses is the sense of casual anxiety about what is to come. Everyone present has feelings about it, and only a handful actually voice those feelings.

It wouldn’t matter to the Rosses anyway, because this is no ordinary documentary. Sometimes they keep their camera on the subject who is talking. At other times, they focus their camera on someone else, if that other person is behaving in a more interesting way than the speaker. Even other times, the directors keep going back to that television screen, on which might be a cruise ship advertisement or the regularly scheduled news or an episode of a soap opera or even, in a truly amazing moment, Sergei Eisenstein’s Battleship Potemkin (just as the Spice Girls’ “Wannabe” plays on the overhead speaker in the bar, which is every bit as strange and amusing a juxtaposition as it sounds).

As for those subjects, they are, indeed, a motley bunch. There are the two bartenders, Marc and Shay. The former is something of a musician, serenading the bar, called the Roaring 20’s Cocktail Lounge, whenever he feels like he has music to share (and watching out for the binge drinkers of the group, such as one man who really needs to be at work right now). The latter, having been given the night shift, has more of a hardline approach to what happens in her bar (and an eye on her teenage son, who hangs with friends outside talking about how much plutonium is necessary to affect the balance of the earth). Present all day in the bar is faithful customer Michael, once a promising actor who failed and then became an alcoholic (At least it was in that order, he opines).

There is Bruce, a veteran suffering from deep-seated posttraumatic stress from his time in the Vietnam War, who believes that the current election will end in a truncated Presidency – either by impeachment or assassination. There is Pam, who arrives to belch freely, to flash her fellow patrons, to mourn the loss of her husband, and to wish a fellow patron, who lost his son, the best of luck in life. There are others here, too, all of them memorable characters who have seen better days than the one that has them gathering, on the last night the 20’s will be open, to celebrate their time together over many years. The film just has one catch: Most of it was staged by the Rosses.

The bar is located in New Orleans, and it is still in service – or was, at least, at the time of filming, though it is depressing to think of what its patronage looks like during the current crisis. The “subjects” of the story are all professional actors of some sort: Michael is Michael Martin, who has had more than a dozen roles professionally within the last 20 years, and Shay is Shay Walker, who recently appeared in Benh Zeitlin’s Wendy (These are only two examples, and even though I cannot really find evidence of it, Bruce and Pam both look vaguely familiar to these eyes). One would have to assume, with the involvement of professional actors playing patrons of a dying bar, itself played by a still-operating one, that the events are fictional. The question is whether that matters at all.

It will to some who prefer binary, explicable, and purist definitions of “narrative” and “documentary.” These things may not be happening in the moment, but it doesn’t mean that they have never happened in some other dive bar that was really closing, coincidentally on the night when this movie takes place. These conversations may have been workshopped, rehearsed, and delivered under controlled circumstances, but their naturalism, easygoing flow, and on-the-fly bouquet would simply mean that the actors are truly gifted at pulling off what the Rosses asked of them. These ideas might have been born, not out of the wild imaginations of its subject, but from the minds of its makers.

That doesn’t make them any less profound, timely, urgent, and warmly, distinctively human. The cumulative impact of Bloody Nose, Empty Pockets is enormous – particularly after a second viewing that calls more attention to the seams of its fictional bearings and, thus, more attention to the Rosses’ management of tone, performance, and even smaller things like the astonishing soundtrack that covers the range of old favorites to current chart-toppers. Honestly, a review would only do certain justice to the pleasures of this deeply unusual and instantly unforgettable work that mixes sociological essay, improvisational drama, absolute realism, and touches of magic here and there. I haven’t seen anything like it, and you won’t have seen anything like it, either.
(Review by Joel Copling)