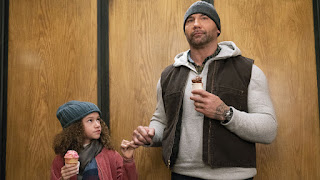 This one was slated for release last year but it flew under the radar finally premiering on Amazon Prime this past summer. Dave Bautista of “Guardians of the Galaxy” fame is a C.I.A. agent who ends up in a slight quandy when Sophie, (Chloe Coleman) a 9 year-old girl finds their undercover work in a minor pickle.

In order to save their assignment, both JJ (Bautista) and Kristine Schaal’s Bobbi have to play along in their adventure.

“My Spy” works because the director, Peter Segal knows what goes into great comic timing.

He helmed the mediocre boxing flick “Grudge Match” with Sylvester Stallone and Robert De Niro in 2013. It was not a great movie per se, but it showed Stallone’s ability to be alongside one of the greatest actors alive today. He also helmed one of the better Adam Sandler films to come our of the past 20-plus years with “50 First Dates” (2004), in which he re-teamed with his co-star from “The Wedding Singer,” Drew Barrymore.

This movie also delves into and touches on the bully crisis that has been running rampant in today’s American culture as well. A couple of over exaggerated street toughs mess around with Sophie in a couple of scenes, but they eventually get what’s coming to them.

Like 2019’s disappointment that was “Stuber” Bautista looks like he is having fun with the so-so script that actually works at times. He shares some great chemistry with the pint-sized Coleman who knows how to delve out the banter at the appropriate time.

What is also amusing is the fact that Bautista looks very uncomfortable wearing a suit. I think back to “Raw Deal,” a 1980s actioner in which Arnold Schwarzenegger went deep undercover fighting the Chicago mob. He looked absolutely ridiculous.

To be quite honest, I actually left with an amusing chuckle and thought that this wasn’t all bad.