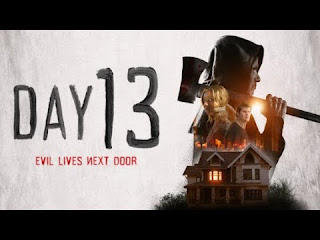 Review: Day 13
My mind has a huge distaste of horror films, but this one is just safe for my soul when it comes to seeing horror and thriller films compared to any film that became a cultural phenomenon. Here, we have the Indie filmmaker Jax Medel who steps up to his game to helm this defying film that captures the familaring Hitchcock’s Rear Window stigma on the digital screen at home. The film stars Alex MacNicoll (Amazon Original’s Transparent, The 5th Wave) as Colten who looks out for his younger sister, Rachel (portrayed by Meyrick Murphy, Kubo and the Two Strings), and G. Hannelius (Disney Channel's Good Luck Charlie, Dog with the Blog) as his new neighbor Heather who moves across the street from him.

The film starts when the boy named Colten whose main task is to look after his sister while their mother is out of town. He suddenly comes across a man and his daughter named Heather who moves into the house across the street from his house. Later in the middle of the night, Colten increasingly grows suspicious when he witnesses Heather’s father attempt to harm her inside their house.

Upon reviewing the film’s scenes, my main take is that Medel’s direction has a soft spot on directing an ordinary feature film. His directing ways really put the focal points on the three main characters (Colten, Heather, and Rachel). The main focal point on them really gives a nice, steady touch that gives both the filmmakers and the audience at home to rehash the old Hitchcock’s suspense to study and delicately smell the wonders of the movie-thrilling ride to Promised Land. Though one of my main troubles are the gritty lazy-writings from Dan Gannon and Walter Goldwalter that don't sound too extraordinary for the film’s plot and the main characters. The other one is that scary, horrifying CGI-emerging ending that threw me off, leaving a strange, confused cliffhanger for both Colten’s character and the entire film itself. And lastly, going from an opposite direction, the music from Evan Goldman is what satisfies the film for its background to give it more depth and distinct flavor for an upscale horror film, poking fun at Hitchcock's and M. Night Shyamalan’s works.

Also starring in the film are Darlene Vogel (Back to the Future Part II), Jonathan Ohye, JT Palmer, and Martin Kove who portrays Heather's abusive father.

Although it’s not a great movie by any means, Day 13 is an ok-movie, if not worse. Day 13 does an adequate job of keeping the viewer entertained for a brief powerful spell just like any regular “Friday the 13th” films that fit the genre. The director really did it. Even those three actors (MacNicoll, Murphy, and Hannelius) are fun to watch onscreen.