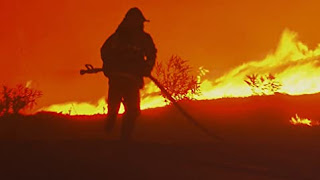 The film was originally slated to be released during the 2020 Tribeca Film Festival earlier this year, but it was heavily cancelled due to the ongoing COVID-19 pandemic. Though, the film did have its world premiere at the Sundance Film Festival. Director Ron Howard and producer Brian Grazer, under their own production company Imagine Entertainment, decided to step up their game to craft a subtle documentary film that deeply explains the real-life stories and the events of the 2018 California wildfires being occurred in Paradise, California.

Throughout the film, Howard has assembled his team to search for stories from the victims of the 2018 wildfires in parts of California, including the little town called Paradise, CA. They have put all the edits, interviews, and footages of the events before and after the wildfire into one 90-minute featurette that impacted the lives and experiences of the people who oversaw the fiery hazards in parts of the forest regions of Paradise.

Compared to any environmental documentaries, both film and television, Howard knows how wildfires became the center of humanity concerns to those who have studied the weather hazards affecting the community and the life-threatening causes that have torn the town and people’s hearts apart from the public. Howard’s team, the town’s community, and the firefighting departments understand how people need to survive the whole mess to rebuild the town and their homes in order to keep everyone safe and healthy afterwards.

Though, the only thing that is missing from the documentary feature is the narration for this subtle story that didn’t explain the details, the tragedy, the calamity, and the reasons why the wildfires are responsible for putting the town in danger. Though, it’s not some cold-eye feature film, it’s just how the film brings the concerns to several parts of the country in regards of the fiery hazards, similar like the Tornado Alley, Hurricane Katrina, and other dangerous weathery parts of the world that threaten the people and the cities nearby. And also, the COVID-19 pandemic which gives the similar structure to the film itself.

Also appearing in the film, at one point, is the fabled activist Erin Brockovich who shows up to assist the people in helping the town to its rightful glory during the town’s meetings about rebuilding Paradise.

Rebuilding Paradise is a good documentary 90-minute film. Ron Howard really knows the ways of putting everything together in one big, wonderous show-and-tell session that is good for not only the audiences, but also great for firefighters, police officers, teachers, and the environmental communities around the city and state. I got to say, this feature looks pretty interesting and very sentimental to watch when you’re studying the weathery, catastrophic events happening to the public that hold their breath into the fresh air. Just watch it and you’ll be shockingly amused and filled with environmental concerns on how the film brings the charity support for the people in Paradise.