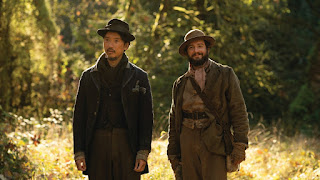 Based on his novel “The Half-Life”, author/screenwriter Jon Raymond collaborated with director/screenwriter Kelly Reichardt to explore another Pacific Northwest tale after her work on Meek's Cutoff and Old Joy. Set in the early 1800's way before Oregon was a state, the film is drenched in the thick rain and woods with the quiet desperation of humanity trying to eek out survival. Its a slow deliberate film that will stay with you long after the credits end.

The movie opens in present day when a young woman searching for mushrooms comes across something revealed in the ground discovered by her dog. It's the bones of two people lying close to each other as if trying to keep warm. Flashback to the story of the bones with Cookie Figowitz (John Magaro) a timid gentle man who is traveling with a rough bunch of feuding men looking for work. He keeps his precarious position among them by cooking. While gathering herbs and mushrooms, he finds an Asian man hiding in the thick brush, naked and shivering. Cookie offers him food and warmth. The man is being chased. He watches as the man escapes across the waterway. Later Cookie's traveling companions go their own way leaving him on his own. At the nearest settlement he looks for whatever job he can do and builds a makeshift shelter Then one day he comes upon the Asian man, King Lu (Orion Lee), dressed well and offers Cookie shelter and food.

King Lu and Cookie also find companionship as they fish and build on the tiny shelter. Cookie sweeps it out, adds flowers, making the best of what little that is there. King was a sailor from China and got in trouble with some Russians. Cookie was an indentured servant who spent some time learning some bakery skills. The the local English factor (Toby Jones) is married to a Native woman (Lily Gladstone) and they live in the only real house in the town. It's a big event when he imports the first cow in the territory. Cookie tells his friend of these fried cakes he used to make with milk. King Lu, ever the man looking for opportunity, plans to have Cookie milk the Chief's cow while everyone is sleeping while he keeps watch from a tree. The cakes are so good they decide to sell them in town for whatever the going currency being coins, shells or trade. Their "oily cakes" are an immediate success and everything they make is sold out quickly. The Chief tastes the cakes and it reminds him of home and invites Cookie to come to his house.

Needless to say the situation with the cow is bound to be discovered and it puts the two friends in a pickle. Cookie had been wanting to just take their earnings to head San Francisco, but King Lu wanted to keep milking that cow until they had enough to travel in style. Both wanting and needing something that neither could ever dream of attaining but still trying to hang on to that hope as long as they can. The unlikely friendship between King Lu and Cookie fills the unspoken moments of their daily struggles and ultimate dilemma. The ending is left open for you to fill in the blanks. Just one of the many reasons why you will think about this movie for sometime later.

A24 hopes to have First Cow for award consideration and while it's an usual choice it could be a contender. First Cow is set to open at the Grand Berry Theater in Fort Worth (pandemic willing) and on Amazon Prime on July 10.
(Review by reesa)