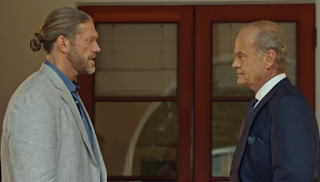 MONEY PLANE
** (out of ****)
Here is a reminder that the terms “good” and “enjoyable” are not mutually exclusive. For a movie to be good, there needs to be some degree of convicted courage, filmmaking vision, and story competence. Even in the event that a movie’s maker doesn’t have the resources to pull off a flawless production, those three things can be present, resulting in a movie that is worth the price of admission. Money Plane certainly has the storytelling down, with screenwriters Andrew Lawrence (who also directed) and Tim Schaaf paring down every bit of excess that could possibly distract from the central premise. Even if Lawrence doesn’t have the resources or clarity of vision to make the end result work, stripped-down plotting is not nothing. That’s where the requirement to be “enjoyable” comes in.

In order to be enjoyable, the filmmakers must, at the very least, provide a premise with some kind of imagination, performances that chew the scenery, and an energy level that doesn’t let those two things down. This film, then, lies within that weird, grey area between being “good,” which it isn’t in any particularly compelling way, and being “enjoyable,” which it manages to be in spite of its shortcomings. This movie has one goal: to provide a starring vehicle for Adam Copeland, the professional wrestling star known as Edge, who gets to play the burly good guy who beats up the bad guys while unveiling the identity of the person actually behind all those bad guys. Every single answer to every question that one might have is blatantly obvious, although that mostly doesn’t matter to Lawrence.

What matters a little more to the director are two things: a commitment to a certain tone and, well, an equally strong commitment to formula. That second thing takes ultimate priority, to the film’s detriment. The plot opens with Copeland’s Jack Reese – accompanied by a team that also includes tech-savvy Trey (Patrick Lamont Jr.), fellow enforcer Isabella (Katrina Norman), and getaway driver Iggy (played by the director) – hired to steal a $40-million painting for a major crime boss/mogul of some sort known as “The Rumble” (Kelsey Grammer, clearly having a bit of fun here). The mission falls through when the painting is missing from the location of the heist, and the infuriated crime lord offers Reese an alternate solution: rob a “money plane” to retrieve his sum, with interest added.

The eponymous aircraft, on which guests gamble on odds involving deadly situations, is the setting and reason for the movie’s existence. Even if Lawrence doesn’t quite make good use of the plane, he and Schaaf fill it with oddballs, the oddest being the craft’s dead-eyed, psychopathic supervising concierge and a cowboy far too confident in his Russian roulette skills (The director, a once-major Disney Channel star, casts his older brothers Joey and Matthew as these two respectively, and both do quite nicely in roles we never would have pictured previously). The gambling gimmick, though, adds a layer of cruelty over a movie that needed even more of the personality added by its strange players, and there is also a lot of unintentional humor in watching Copeland pretend to fly a plane.

In other words, the movie sets up a lot of promising material that it never quite follows through on, perhaps because the screenwriters are so focused on the simplicity of the premise that they forget even to provide a twist that is genuinely surprising. There is no real mystery about who is truly behind all this, so Lawrence relies on the few scenes of actual hand-to-hand combat given to Copeland, a couple of mild shootouts, and the involvement of a few recognizable supporting actors in completely thankless roles (namely, Denise Richards as Reese’s wife and Thomas Jane as a crucial ally). Money Plane is ultimately wasteful of the opportunities for entertainment that it presents. So, is it good? No, not really. The movie certainly has its moments, though.
(Review by Joel Copling)

Posted by Dallas Movie Screenings at 12:54 AM