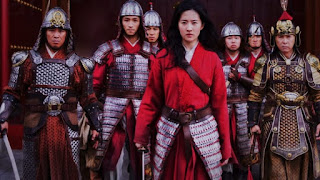 Mulan may bring honor and glory but falls flat.
After several theatrical-releasing delays due to the ongoing virus, Disney finally decided to release this feature film on Disney+. As people, including the fans of animated Mulan, first see the trailer, they begin expressing their dislike for this live-action remake of Mulan, which brought up some negative publicity and thoughts about how this film will turn out to be. However, when they finally see the entire film, they slowly start to warm this film up, which is very hard to believe. The film is directed by Niki Caro (Whale Rider) and stars Liu Yifei as the titular character whilst actors Donnie Yen, Tzi Ha, Yoson An, Jason Scott Lee, Gong Li, and Jet Li served as the supportive actors to Yifei.

In the film, Hua Mulan, the eldest daughter of the honored warrior, takes her ailing father’s place to serve the Imperial Army and defend the country from the group of invading armies taking over the country. Disguised as a man, she must train herself in every step and direction as well as learning the values of inner-strength that can increase her potential.

The plot and Niki Caro’s direction have put every ounce of hard work on Yifei’s character to match the original, animated incarnation from the 1998 animated-version of the film. Caro, along with producer Jason T. Reed also had her filming crews watch and study the influences from several martial arts films in order to make the storyline and the action sequences more relevant with Jackie Chan-style moves and Kill Bill-packaged visual effects being added for structural integrity. Additionally, the orchestration from the camera angles worked simultaneously and tirelessly well on Yifei’s action sequences and the battle throughout the film and at the very end. Not only the director and the cast have done all the scenes and cuts painstakingly, but they also brought music composer Harry Gregson-Williams on the set who utilizes the songs and compositions from the 1998 version with no musical numbers being featured or added in this remake, which kinda upset the fans out there.

While listening to some nice, clean dialogue being given to the characters from the screenwriting team of Rick Jaffa, Amanda Silver, Lauren Hynek, and Elizabeth Martin, parts of the writings given for the actors and actresses are somewhat hard and pointless to follow. The main reason is due to the director wanting to make the characters and the story to be more realistic and fairly complex in several scenes. Nevertheless, the plot seems to be pleasurable to guide through.

Here we have Donnie Yen who is portrayed as the leader of the Imperial Army and serving as a mentor to Mulan while Yoson An appears as a soldier ailing with Mulan. Tzi Ma also appears as the father of the titular character who was a famed warrior and was recalled to join the army despite his failing health. Jason Scott Lee and Gong Li as the ruthless warrior and the female witch who sides with him. And lastly, despite the small screentime, Jet Li shows up as the Emperor of China.

And what can be surprising to give bonus points is the cameo appearance from actress Ming-Na Wen, the voice of Mulan from the animated version.

Overall, Mulan is a very good two-hour delight. Caro’s direction, Liu Yifei, and the cast really did an amazing job on making this film. It’s not what it looks like compared to the 1998 animated film, but it looks like the story has been well told in a different direction. Love it or hate, I promised you this may be the best remake on the top of its levels to watch on Disney+.