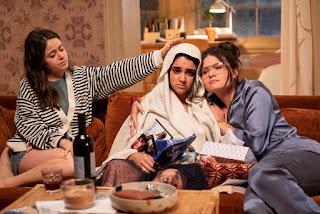 Love finds a way in The Broken Hearts Gallery!
By recalling Ron Swanson’s quote, “If you don’t believe in love, what’s the point of living?” Most movies don't have to be as romantic as other Disney films. People asked if movies reflect relationships. To answer that question, sometimes it does, but not all the time. The real definition of a movie is a cultural product that centers on the person or people working and living in a certain point of time. Television writer Natalie Krinsky takes her first movie-directing job out through the streets of New York with actress Geraldine Viswanathan (Blockers) as an aspiring art curator named Lucy Gulliver while actors Dacre Montgomery (Stranger Things), Utkarsh Ambudkar, Molly Gordon (Booksmart, Life of the Party), and Phillipa Soo (Disney+ Hamilton) both received supporting roles.

The Broken Hearts Gallery follows a 20-something New Yorker and art gallery assistant named Lucy Gulliver who gets dumped by her latest boyfriend and creates a pop-up space for the items of previous relationships. While doing so, she meets and befriends a new hotel owner named Nick who agrees to open up a small pop-up gallery in his hotel.

The Broken Hearts Gallery serves as Natalie Krinsky’s first feature film to work on as well as her first time doing the screenwriting duty on a feature film. Before that, she worked on television shows Gossip Girl and Grey’s Anatomy as a writer on a small number of episodes, which became a starting point to her career. Her direction in the film really increases much velocity on the story and the characters with the picture quality and color palette are an improvement for the 1980s or 1990’s groovy era, making this film look fresh, new and improved as if people are going back through time to see their treasured memories they have as children or younger teens. Actress Selena Gomez is also involved in the film as an executive producer.

The comedy, the references, and the jokes being featured in the film are what makes the film easy to handle with such huge laughs to pop up for that affair. This one receives bonus points for witty writing, adding a touch of humor to it. The camera shots and angles coming from cinematographer Alar Kivilo really put some nice soft spots on the scenes, capturing the perfect balance for that main focus on Geraldine Viswanathan and Dacre Montgomery together.

The chemistry between Geraldine Viswanathan and Dacre Montgomery makes this film easy to watch and follow as they really bring up a good, diversified relationship the director really wants to study how any romantic films and television shows weaves in every scene to scene based on her influences on romantic, comedy films and any films that feature complicated, dysfunctional relationships with friends and families in real life.

Also appearing are Arturo Castro as Marcos, Suki Waterhouse as Nick’s girlfriend named Chloe whom he names the hotel after, and the legendary actress and Broadway star Bernadette Peters as Eva Wolff with the special guest appearance Roy Choi who had a cameo in this one.

On the bright side, The Broken Hearts Gallery is absolutely one of the greatest films I ever watched, which clocks over to 109 minutes. The director, Geraldine Viswanathan, and the rest of the crew have done an amazing job on working on such a fine piece of artwork that meets its gold standards and requirements for the motion picture studios. Basically, this film goes right up in my alley when it comes to social relationships. If you’re going to win a bet to see which film to choose that is greater, my best bet is that I highly recommend this film for both adults and parents who have been struggling with relationships throughout their lives.