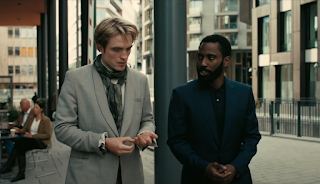 Word of the Day: TENET!
After several speed bumps of theatrical delays and with the theaters being slowly reopened, Warner Bros. finally selected a perfect date for the film to be released after the COVID-19 pandemic. The Dark Knight alumnus Christopher Nolan returns to the director’s chair after helming 2017’s Dunkirk with Emma Thomas climbing onboard as a film’s producer. Tenet stars John David Washington (BlacKkKlansman) as a main lead role as the no-name CIA agent while Robert Pattison, Elizabeth Debicki, and Kenneth Branagh got Washington’s back as supportive role-playing game characters in the film.

Tenet follows the unnamed CIA agent, or The Protagonist, who is on a secret mission to prevent World War III by manipulating through time or utilizing his time-reversal motion to find out about the past and the future.

Tenet is actually a palindrome which is a number, word, or phrase that can be read backwards and forwards. Nolan has been long-waiting to come up with the story for this film for decades. He really wanted to do a fine piece of work on a spy film after his experience with action, science-fiction films, taking his ordinary experience and professionalism from his Dark Knight duties and Inception assignment. Nolan also has cinematographer Hoyte van Hoytema used the mixtures of 70 mm and IMAX high-resolution cameras on the action-pack sequences simultaneously forwards and also filling scenes backwards (briefly known as the “reversal motion” in the filming cuts and scenes).

Nolan’s direction moves pretty straight forward on centering and camera-angling on Washington’s scenes in order to provide a sophisticated “spy” scene, even when involving adding visual effects and a little, fiery CGI on his dangerous-packed moments predominantly on the film’s second half on behalf of Nolan’s visual and special effects team. Even when Nolan has to go through different measures on having Hans Zimmer onboard, he instead brings the musical talents from composer Ludwig Göransson (Black Panther) who not only composes for the film but also produces a Hans Zimmer-flavored orchestra structures on several parts of the film and the climaxes for proper boost for an Nolan-Zimmer project and to fit the Nolanian tradition for all his works from the past.

Here we also have Robert Pattison who portrays the CIA agent’s handler who reveals about the time heist Washington's past and future while Elizabeth Dibicki plays as the ex-wife of Kenneth Branagh’s self-tempered Andrei Sator, a Russian oligarch. On and off-screen, Tenet also stars Indian actress Dimple Kapadia as Priya, the arms trafficker who is a hidden supportive character-turned-antagonist.

And with the surprise twist of being top-billed for the movie marketing, English actor and Nolan’s frequent collaborator Michael Caine also appears in the film despite receiving a small screen time.

While Tenet is highly-strung with excitement and explosive, the main things that the filmmakers made Tenet much more confusing and a bit un-enjoyable to look and listen: the screenwriting from Nolan and Emma Thomas didn’t provide much more integrity on the both Washington, Debicki, and Pattison’s characters throughout the film to have hard spot on any scenes hardcore as well as usages of sound mixing that didn’t sound too spy-ish and fit the genre for both spy films and action-packed adventure films, especially when it all comes down to Spaghetti Western films and War films for that ludicrous feel. Overall, the parts of the plot seem flawless and easy to guide forward, much like the comparison of Guy Ritche’s Sherlock Holmes tonely work.

As my calculations are correct, Tenet is actually a good 150-minute feature film. I couldn’t say more or less, Christopher Nolan really outshines his role as a director, guiding the rules and procedures for the cast and crew like he did with his tone-depth matterful Inception despite putting too many things in one basket regardless. Washington and Pattison really fit the bill on this one just to make this film more interesting to watch and digest. If you have the option for choosing a film, I say this, Tenet is worth your time and money.

Posted by Dallas Movie Screenings at 10:00 AM