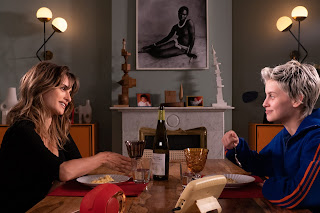 This film is a very good turn of events for director Pedro Almodóvar, despite his age of 72. This goes to show, most directors have reached a peak somewhere during their career, like Ridley Scott and Steven Spielberg for example. Their films stopped improving from then on. Any remarkable filmmaker can achieve their goal no matter what difference it makes. As he gets older, he makes his films increasingly intense and astonishingly pure. It's a very unpredictable challenge that any film is seemingly talking about certain topics and turning out to deliver something completely new and different. Featuring Penélope Cruz and Milena Smit in their main roles, this film had its premiere at the 78th Venice International Film Festival.

Parallel Mothers follows two women, Janis and Ana, who are giving birth to their child on the same day. Janis has a casual relationship with Arturo, a forensic anthropologist who is studying mass graves that contain the remains of those killed during the Spanish Civil War, and asks Arturo to research a mass grave where her great grandfather was buried. After getting pregnant, Janis meets Ana, who is much younger and deeply traumatized, in the maternity ward of the hospital. Oscar-winning actress and Pedro Almodóvar’s frequent collaborator Penélope Cruz (Vicky Cristina Barcelona) portrays her main role as Janis while Milena Smit appears on her side as Ana. Cruz is magnificent as she expected great things about how she is able to get her act together and so is Milena Smit. She’s also outstanding in her acting, which is why both of them have a wonderful onscreen chemistry as if they’re best friends or simply next-door neighbors.

For starters, this film is pretty much like an autobiography of some kind as Almodóvar wants to make something to represent Spain, he is what makes this story intelligently integrated into the film, talking about death, war, and coping with something sinful. The contrast with the other themes in the film is striking: we see Cruz, and the other parallel mother Milena Smit, involved in childbirth, friendship and rethinking their future lives, which are the heavy main messages being carried all over the film.

When it comes to storywise and writing-wise, all of the usual Almodóvar-directorial ingredients have been blended in together exquisitely and smoothly, building up a courageous, unorthodox story about women and motherhood. The superb acting coming from Penelope Cruz is nicely well-done as well as the tasteful clothing and its interiors, beautiful cinematography, and intelligent dialogues with some surprising twists. But there’s one terrifying thing to be warned just to be on a cautious side, Almodóvar adds a little extra of what is called the attack on the political parties in Spain.

The majority of the Spanish supporting cast also did a remarkable job to add that comment despite having some small focal acting cast right there. Here in the film, we have Spanish actor Israel Elejalde as renowned forensic archeologist Arturo, Aitana Sánchez-Gijón as Teresa, Rossy de Palma as Elena, and Julieta Serrano as Tía Brígida.

With some emotional and scary images being shown onscreen, Parallel Mothers is a relatively unspectacular two-hour film, because it consists mostly of people talking and showing their emotions to each other. However, it takes extraordinary directing skills to make such an ambiguous film about women with such strong emotional storytelling ingredients to fascinate critics and audiences. This is one of those films that are just very good, because they are made by an experienced craftsman who knows what anyone has been doing all this time. I think this film is definitely worthy of being an awards contender for Spain, predominantly Oscar or Golden Globe for 2021 or 2022.

Posted by Dallas Movie Screenings at 7:57 AM