The Legend of La Llorona 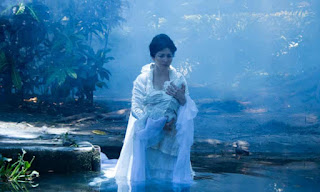 Lately, there seems to be a plethora of movies about the ghost of Mexican folklore, La Llorona. In 2019 alone two films were released. The first, “The Curse of La Llorona,” was released as part of “The Conjuring” universe of movies. It wasn’t a particularly good film. Later that year, a more serious take on the tale was released called “La Llorona.” While that was a much better film, it didn’t get much notice. A quick check on IMDB reveals that there have been a number of films produced about the legend over the years. Now comes director Patricia Harris Seeley’s film, “The Legend of La Llorona.” Are audiences really clamoring for this much material about the ghost? Surely not.

Seeley’s movie starts with a sequence that takes place late at night in a deeply wooded area by some canals. A mother and her two young children are making their way to cross the border when they are attacked by La Llorona. The sequence is ineffective, does little to build any style or suspense, and features some cheap-looking effects. It’s inconsequential, has no relation to the rest of the movie, and does little more than set up the tone for what follows. The Candlewoods, introduced as they ride in a taxi driven by Jorge (Danny Trejo), have come to Mexico for a quiet getaway. Carly (Autumn Reeser) and Andrew (Antonio Cupo) are having marital problems following the death of their infant daughter and have come to the villa, owned by Veronica (Angelica Lara), with their young son, Danny (Nicolas Madrazo), for a change of scenery. Carly and Andrew clearly have a strained relationship, which isn’t helped by Andrew’s obtuseness. He’s clearly not the sharpest knife in the drawer as evidenced by an awkward make-out session with Carly who’s obviously not interested at the moment.

Shortly after their arrival, Danny is attacked by a ghostly shroud in the nearby canals. Carly and Andrew manage to save him. To Andrew’s disbelief, Carly and Danny claim to have seen a woman in the water. The woman is La Llorona (Zamia Fandiño), translated to English – The Weeping Woman. Carly continues to see visions of La Llorona, some involving the ghost kidnapping her son. Eventually, the kidnapping becomes a reality. Will Carly and Andrew be able to save their child from the spirit?

There is a lot wrong with “The Legend of La Llorona.” To start, the Jorge character keeps popping up for some reason. He’s at the restaurant Carly and Andrew go to for dinner. He’s suddenly there when they call the police following Danny’s disappearance, both parents believe the cartel took their son. He even seems to be staying at the villa as well later in the movie. When the ghost really starts attacking everyone, he’s there shooting a shotgun at it. Yes, you read that right. And while we’re on the subject of Jorge, he continually tells Carly and Andrew that the area they are in is not safe for them. Did this couple do any research before planning this vacation?

The ghostly happenings of La Llorona have no consistency. Veronica tells Carly that La Llorona only takes babies but we see her take older children and attack adults. Plus, Veronica is clearly terrified of La Llorona. It’s revealed in flashback why but, again, there is no consistency to why and when the ghost attacks. Too many of the characters shoot guns at the ghost. Do they really think a bullet would harm a supernatural entity?

To quote Carly, “none of this makes sense.” Thanks, Carly, for speaking our thoughts out loud. “The Legend of La Llorona” feels like a bad television show. The acting and the pacing are atrocious. Maybe this could have worked as a short film. As a feature, it’s stretched thin. You’ll be begging for this one to end before it’s finally over.

Posted by Dallas Movie Screenings at 8:08 AM