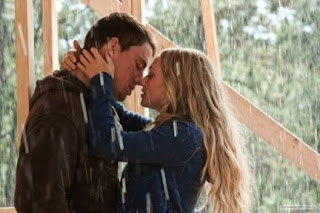 John Tyree is on leave from his Special Forces unit of the Army when he cute meets Savannah by diving off the pier to save her fallen handbag. He’s only home for two weeks, but in that time they become inseparable and fall in love.

It’s attraction at first glance between John (Channing Tatum) and Savannah (Amanda Seyfried). She invites him to a BBQ at her house at the beach. He meets her friend, Tim (Henry Thomas) who has a son with Autism. It’s because of son that Savannah has a dream of having a summer camp for kids with special needs. She is also helping rebuilding a house for a beach family whose house was destroyed in the last storm. John believes that Savannah may be just too good for him.

John is staying with his dad, (Richard Jenkins) who collects coins and cooks lasagna every Sunday. He’s a bit nervous to have Savannah meet him because of his peculiarities, but she gets along with him famously. When Savannah suggests that his father may be Autistic too, John gets defensive. That is until he begins to take another look at his father and their relationship.

John’s leave is only two weeks, but in that time the young couple feel they are in love. He promises that he will be back in a year then they can truly be together. Savannah says they will write and to say everything and anything in their letters. Since John’s job takes him from country to country, they number their letters counting the time they will be reunited. Then 9/11 happens and his unit decides collectively to extend their service. Savannah is disappointed, but John doesn’t realize how much until her letters stop coming and she writes him a real Dear John letter announcing she’s getting married. Years pass before it all gets sorted out in the end.

Directed by Lasse Hallstrom (The Cider House Rules and Chocolat).doesn’t over sentimentalize the story. The actors are attractive and sincere. Richard Jenkins is the standout here, never letting his character become a handicap. It’s almost like another Hallmark type movie with pretty people and better production values. This is the fifth novel by Nicholas Sparks that has sparked a cinematic rendering with two more due in the near future. The same formula applies of star crossed lovers overcoming the odds and finding happiness. Definitely a “chick-flick”, bring tissues.
Review by Reesa