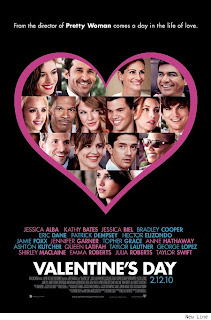 Reed Bennett, owner of a florist/café shop Siena Bouquet, is the narrator of the stories involving the lives and loves a a group of multigenerational people intertwined on Valentine’s Day.

Reed (Aston Kutcher) awakens his girlfriend Morley (Jessica Alba) by putting a diamond ring on her finger. She is surprised but says yes. His co-worker Alphonso (George Lopez) was surprised to hear that she accepted. His best friend, Julia (Jennifer Garner) is also skeptical but she is distracted by the new man in her life Dr. Harrison Copeland (Patrick Dempsey), who she doesn’t know is married. Julia’s 10 year old student, Edison (Bryce Robinson) has a crush on her. Edison lives with his grand parents, Estelle and Edgar (Shirley McClaine and Hector Elizondo). Edison’s babysitter Grace (Emma Roberts) seeks romantic advice from Estelle and Edgar regarding her new boyfriend Alex (Carter Jenkins) and taking the next step. They have been married happily for 51 years when Estelle drops on bombshell On Edgar by confessing an affair. Grace and Alex (Carter Jenkins) are trying to have the perfect Valentine’s Day, but everything keeps going wrong. Felicia (Taylor Swift) is Grace’s high school friend who offers lots of advice. Felicia and her boyfriend Willy (Taylor Lautner) are interviewed for a news segment about young love. The news producer Susan (Kathy Bates) had assigned sports reporter Kelvin Johnson (Jamie Foxx) who resents being sidelined for a fluff piece. He wants a major interview with professional quarterback Sean Jackson (Eric Dane) who is on the verge of retirement after his team lost the playoffs. Sean’s publicist Kara Monahan (Jessica Biel) had been fielding questions all day about her client. She is also holding a “I Hate Valentine’s Day” party for people who like her are always single on Valentine’s Day. Sean’s agent, Paula Thomas (Queen Latifah) is all business and has no time for love. The receptionist at Paula agency, Liz Curran (Anne Hathaway) is moonlighting as a sex phone operator. This causes problems with her new boyfriend Jason (Topher Grace) in the mail room. Jason is an agent in training who is shocked after learning of her 2nd job just after they consummated their relationship. Flying into LA is US Army Captain Kate Hazeline who is flying in for a short leave from the mid east for an important rendezvous. She is sitting next to Holden (Bradley Cooper) offers a friendly ear and a shoulder to sleep on. Holden offers his hired car to take her to destination after flying 14 hours to get to LA.

All of these stories eventually find a resolution in sometimes funny but predictable ways. Director Garry Marshall ably handles the star power and makes everyone looks good. There must not be any unattractive people living in LA. The story written by Abby Kohn and Mark Silverstein manages to give everyone a little moment to shine. The standouts are Jennifer Garner, especially when she confronts her married beau and Anne Hathaway running off with her cell phone doing her second job. Even Ashton Kutcher was almost not as annoying as usual because there were so many others to counter-balance his performance. This is a good mindless date movie just in time for Valentine’s Day.
(Review by Reesa)