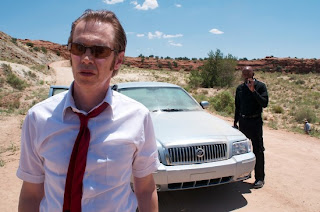 Steve Buscemi plays John Alegheri, a reformed gambler who now lives in a gated community home and works as a insurance claims adjuster. Unfortunately he’s still has a compulsive addiction and spends his last money on scratch cards to pay for the gas at the pump.

John used to be a high roller in Las Vegas. He lived the good life with compensated rooms, food and drinks that came with privilege of winning big. When his luck turned south, he got in his car and drove as far as he could on his tank of gas, which means New Mexico. He’s a bit of a sad sack who is carrying on with Jill (Sarah Silverman) in the next cubicle who is constantly smiling like her happy faced accessories. John decides to ask the boss Mr. Townsend (Peter Dinklage) for a raise. He doesn’t get the raise but he manages to be assigned to the fraud division with the company's best case worker, Virgil (Romany Malco). They have to investigate and accident claim made by a stripper near Las Vegas.

John is not too happy about returning to Las Vegas which just reminds him of how far he has fallen. He’s also a bit pre-occupied with the discovery that Jill and his boss had been previously involved. Now he’s stuck in a car with a extremely terse co-worker with an attitude who has to teach him a new job. The bizarre road trip includes a wheelchair stripper giving John a lap dance, encountering nudist survivalists, tow truck driver that doubles as a carnival fire act, and a junk yard owner names Luce E. Fer.

Written and directed by Hue Rhodes the story is loosely based on Dante’s Inferno. Credit is even given to the 13-14th century poet Dante Alighieri. You really have to reach to find the connections of John’s journey to recognize his sins and find goodness, but this quirky comedy will keep you chuckling.

Posted by Dallas Movie Screenings at 10:19 AM