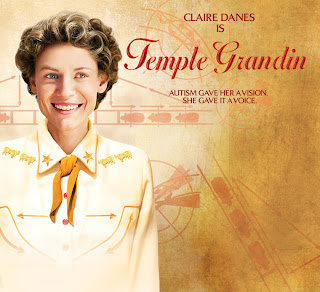 In 1951 when Temple was 4 years old, her mother took her to the doctor concerned that she was not speaking. The doctor told her the best course of action for her daughter was to send her to an institution. At that time, autism was considered to be caused by a mother not giving enough attention to their child as a baby. The school of thought did not change for many years until it was discovered to be a neurological disorder.

Fortunately for Temple (Claire Danes) her Harvard educated mother (Julia Ormond) took on the task of trying to teach her daughter to speak, read, and integrated her into main stream schools. Temple suffered from the constant teasing and bullying at school before her mother sent her to a boarding school in New Hampshire. There her aptitude for science and math was encouraged by her science teacher (played by David Strathairn). Before heading off to college, Temple went to Arizona to spend the summer at her Aunt Ann’s (Catherine O’Hare) cattle ranch. Temple becomes fascinated by the cows and their mooing. Particularly the holding pen used to calm the cattle when giving them medicines. Temple builds one of her own to use as her autism causes her pain with human touch, and her hugging machine becomes a substitute when she is feeling anxious. Temple is able to survive the emotional, educational and professional turbulence in her life by following her mother’s advice of being different but not less.

The movie airs on HBO this weekend. It was directed Mick Johnson with a teleplay by Christopher Monger and Merritt Johnson who effectively brings Temple’s story from her viewpoint. Her autism turns words into pictures. Her visual acuity is how she deals with her environment. Because she can touch animals and not people, she decides to study animal behavior. Temple develops a way to humanely treat cattle in the stockyards to the slaughter houses. Today her work and designs have changed the way the meat industry handles their products. It will be something you will think about next time you have a burger.

Clair Danes gives a knockout performance that will hopefully be noticed next Emmy season. If you check the real life footage of Temple Grandin on the internet, Danes manages to channel the real Temple’s mannerisms and speech patterns. The inspiring scene at the end of the movie when Temple is telling a roomful of parents that she was able to get her masters and was working on her doctorate; that people with autism can learn and grow and develop was heartfelt. As a parent of a special needs child, Temple’s accomplishments and fortitude should be required viewing to help change way people think of those with disabilities into being different but not less. Take that Rush Limbaugh.
(Review by Reesa)