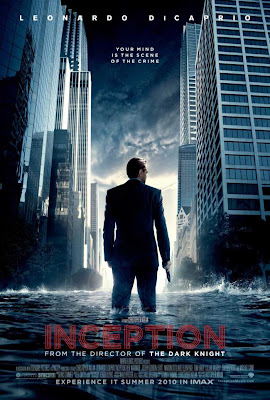 In a world where we have the technology to enter a person's dreams, Dom Cobb is a skilled “extractor”. He and his partner, Arthur work together in stealing valuable secrets for cooperate espionage. A client purposes that they do an “inception”. Putting in a suggestion in someone's subconscious which most experts in their field say it can't be done. Cobb is ready and willing to try it, but he has a dangerous secret that may jeopardize the job.

Japanese business mogul Saito (Ken Watanabe) wants Cobb (Leonardo DiCaprio) to plant a seed in in the mind of the son of a rival CEO. Fischer (Cillian Murphy) has just inherited his late father's empire with whom he harbored some unresolved issues. Cobb assembles a team of experts consisting of Arthur (Joseph Gordon-Levitt) his point man who investigates their mark. Ariadne (Ellen Page) is their architect who is charged with creating mazes in the dream world. Eames (Tom Hardy) is a master thief and has the ability to mimic other people. And the chemist Yusuf (Dileep Rao) who has created a long lasting sedative that will keep them in a deep sleep which they need to do their work. The job requires layers and layers of scenarios. They have to create dreams within dreams within dreams. Like a computer game, you have to battle whatever “projections” are protecting the dreaming subject. If you are shot in this dream state you may suffer serious consequences. If you don't come out of your dream state in the right way your mind will be left in a limbo. On top of all this Cobb is also experiencing hallucinations of his wife, Mal (Marion Cotillard) who is haunting his dreams.

Christopher Nolan who brought us such gems as Memento, The Dark Night, and The Prestige once more creates a movie concept that is smart and challenging. After a summer of films that have promised everything but left wanting, it's extraordinary to find a movie that makes you think. You will have to pay close attention as the scenes can be distracting and the exposition can be confusing. But it's well worth the effort. The special effects are a inventive visual treat without those shaky cam action shots. I actually didn't mind DiCaprio in this. Joseph Gordon-Levitt does these great floating gun and fist battles but Ellen Page is left being Cobb's dream adviser. This is obviously not a movie for everyone. It's about 20 minutes too long, the plot and concept may go over some heads, but it's worth the effort. Michael Caine, Tom Berenger, Pete Postlethwaite and Lukas Haas have too brief roles. Look for TV character actor Michael Gaston at the end.

Each of the dream thieves must carry around a little totem to be used like a tether to the real world. Cobb has a little metal top that he gauges a dream from not a dream. If the top spins and doesn't stop, then you are in a dream. It's probably a good idea to bring something in your pocket so you can tell if you are still dreaming.
(Review by reesa)