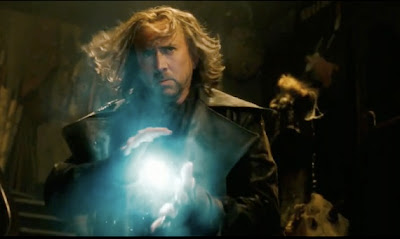 Merlin had three students, Balthazar, Veronica and Horvath. When Merlin's nemesis Morgana wants to raise the dead and bring darkness to the world. Merlin loses the battle when Horvath betrays his teacher and his friends. Balthazar manages to capture Morgana into a magical nesting doll by the sacrifice of Veronica who is also trapped. Merlin's last words was to predict the only way to truly stop Morgana was by the coming of the The Prime Merlinian. It's up to Balthazar to find him.

Centuries have come and gone while Balthazar (Nicolas Cage) hunts down Horvath (Alfred Molina) who had escaped and eventually captured in another layer of the doll. He also battles other followers of Morgana (Alice Krige in her Star Trek Last Contact evil best) while searching for the child that will be her downfall. In present day New York City, a young Dave Stutler (Jake Cherry) is a smart but socially inept kid. On a field trip with his class he is trying to impress a pretty classmate when the note she sends him gets blown away. While following the scrap of paper, it takes him to a magical curiosity shop. He is unexpectedly drawn to the nesting doll. He accidentally releases Horvath who battles Balthazar. Somehow they both are trapped into a magical artifact. Dave, freaks out and throws the nesting doll out on the NYC streets.

Ten years later, Dave (Jay Baruchel) is now a physics college major with his attention back on Becky (Teresa Palmer) the girl he had a crush on as a middle schooler and is now in his class. He's still awkward and uncomfortable, but she remembers him being smart and clever. Meanwhile Balthazar and Horvath manage to escape. The race to find the Morgana's prison begins. They seek out Dave who was last seen with the nesting doll. Balthazar realizes that Dave has a hidden magical potential and begins to train him. Although Dave is a little distracted as he's still trying to impress the girl. He must learn quickly as they are both needed to battle Morgana and Dave has to become The Prime Merlinian to save the world from the evil darkness.

Cage is best when he's playing bigger than life characters who are wise cracking and irreverent being Cage in his good guy mode. Jay Baruchel plays the nerdy awkward guy like in She's Out of My League. His whiny voice is like Gilbert Gottfried and gets to be annoying at times. But together they make a good team as mentor and student and the movie relies on their chemistry. Jon Turteltaub who directed Cage in in National Treasure paces the action with acceptable FX for magical conjuring . A lot of writers had their hands in the screenplay and it didn't really help the story: Lawrence Konner, Mark Rosenthal, Matt Lopez, Doug Mira and Carlo Bernard. In this case more does not equal better. There's really not a whole lot going on besides the electrical zapping of one another. It's like a low-rent Harry Potter. There's a nice little nod to the Mickey Mouse and mop sequence in Fantasia when the apprentice tries to do his chores using magic and it gets out of hand. In all it's not a great movie, but one that will fill an afternoon movie break.
(Review by Reesa)