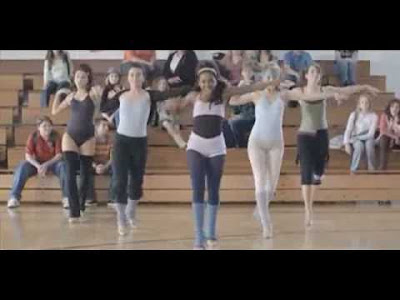 In this New Jersey by the shore town, there are competing singing acts at a local showcase. One is a group of teenage sisters called the Wiggies as their dad and manager is an owner of a wig company. They are very slick and stylishly coordinated. The other group consists of five 12 year olds who don't have the fancy costumes, or slick arrangements but make it up in spunk and confidence on stage. But the Wiggies and their dad are constantly undermining the other acts by sabotage like leaving gum on a seat so it rips a costume, knocking out the lights during a performance or putting pepper in their headset microphones.

The junior high school friends call themselves The 5 Ovations. The Wiggies are always
rubbing their talents into the younger girls faces even at school. A talent contest is announced that the CBS TV station in NYC is having a competition that will be broadcast on the air and the winner gets a million dollars but you have to submit a music video. While the Wiggies have the money from daddy to make a great video, they also have original material thanks to the brother of Ovations singer Brittany (Kayla Jackson). She lives with her brother and gambler grandfather and can barely make their rent even with her singing on the streets for extra cash. She meets up with Joei (Joei DeCarlo) another young classmate and Jersey tough girl who wants to manage their band. She's looking for the guy who stole her dad's money and caused his death. She will exchange her managerial skills for Brittany help in finding the bad guy. Joei gets them paying gigs playing at an old folks home. They also enlist the help of the classmate whose father owns a recording studio. Somehow they manage to create a video to submit. Of course the Wiggies go in and add some editing to it unbeknown to the girls. Unfortunately the audience finds those changes hilarious and they end up in the finals with the Wiggies.

Steward Raffill directed and wrote this feature has been around since the 70's having done Ice Pirates and the Philadelphia Experiment. This movie is all over the place with Joei's search and Soprano's type of bullying that includes snakes and eels. Then there's the gambling grandfather, the irresponsible brother who writes music, the father of the Wiggies who wears preposterous hair pieces and the mean spirited attitudes of The Wiggies. The dancing and singing routines are amateurish and the acting is flat with a cast of unknowns. What is even more annoying is the introduction of the character Alanna Wannbe (“cause I'm gonna be”) a feisty loud and obnoxious little girl who gets in the way of The Wiggies and the Ovations to get in the spotlight. Despite all of that, middle school aged children in the audience loved it. It's like the Spice Girls movie, only not as charming.
(Review by reesa)