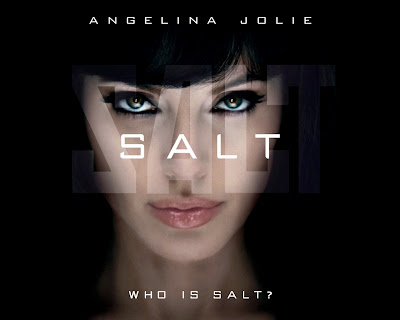 Evelyn Salt works for the CIA. She endures horrendous torture at the hands of the North Koreans when she is captured while posing as an oil executive. The CIA would have left her there, but her German husband manages to get her released on a prisoner exchange.

On her way to an anniversary dinner with her husband, Salt (Angelina Jolie) is brought in to interrogate a “walk in”. A Russian spy presumingly wanting to come in from the cold. During the conversation, Orlov (Daniel Olbrychski) tells her about a plot to kill the Russian president who is in DC to attend the funeral of the Vice President. That there are agents in the US intelligence agencies waiting for a signal to commence a doomsday plan. One of these agents is named Evelyn Salt. Seemingly unnerved and caught off balance by this revelation, Salt pleads to her fellow agents to let her call her husband. Meanwhile Orlov manages to kill his handlers and escape the building. Knowing that she is soon to be interrogated she also tries to leave but she is tracked by the multiple cameras in the building. Salt's colleague (Live Schreiber) is trying to keep the agents from killing her and asking questions later. Peabody (Chewitel Ejiofor) is a play by the book agent who wants to capture Salt no matter what but always manages to be one step behind. The pursuit is a highly charged action sequence involving Salt walking on the edges of apartment buildings, jumping from truck to truck on the Beltway, a motorcycle, and tasering a cop to speed up or slow down while crashing into other pursuit vehicles. Salt goes on the run with the CIA, FBI, Secret Service and maybe the Russians too. We are slowly introduced to some flashback sequences involving a rich Russian patriot recruiting and training American children in Russia to become sleeper agents. The action doesn't let up as Salt breaks into the cathedral at the funeral service, breaks into the White House underground bunker that has her parkouring down an elevator shaft and even jumping into the Potomac from a helicopter. The elevator shaft sequence suffers from some disappointing digital enhancements, but it's the thought that counts.

Phillip Noyce who brought us tense action thrillers as Clean and Present Danger and Patriot Games, lays on the action very seriously. Working with a script by Kurt Wimmer who did Equilibrium and has the new Total Recall in development, the story is paced to keep from bogging down in expository. Originally the part was written for Tom Cruise and retooled to fit Jolie who did most of her own stunts. The whole Russian spy plot is interesting in light of the recently revealed agents in the newspapers recently. Salt is a bigger than life character who can take out most anyone who gets in her way. She's like the female James Bond. Jolie manages to poker face her opponents, but we the audience can feel her ever so slight tells. It's also nice to see a woman spy not having to wear sleazy costumes and high heels while fighting. Salt is a real woman who is competent and tough as nails. The final scenes begs for a sequel as the audience doesn't quite get a complete answer to “Who is Salt?”
(Review by reesa)