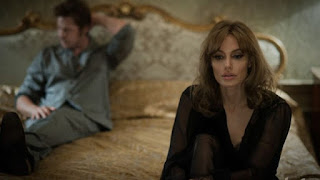 The whole concept of watching a couple having a meltdown is a hard sell no matter what. If you want to see fighting just stay home with your spouse one night. The curiosity factor is the only thing left for this vanity project directed, written and produced by Angelina Jolie-Pitt which she stars with her husband Brad Pitt. It tries to be a 1970 French film with it's luxurious scenery, costumes, and lingering shots of angst. But in the end it's 2 hours of your life you can't get back.

Angelina and Brad play Vanessa and Roland who have come to this seaside village from New York City so he can write. Vanessa is all sorts of elegant and disconnected. The simple scene of Roland searching for a light for his cigarette in the car while driving, and she doesn't even help tells all about their relationship. Roland goes to the local cafe while he tries to find inspiration for his next book by asking people about how they fell in love. He makes friends from the cafe proprietor Michel (Niels Arestrup). Lots of conversations in French with subtitles about love and loss. Meanwhile Vanessa broods in their elegantly appointed hotel suite. She ventures outside to the local grocery store for fresh baguettes and an espresso machine. She wears long sleeve blouses, skirts and huge sunhats. Looking all glamourous and aloof. Most people smile at children, but nope, not her.

A young newly married couple move into the next apartment, Francios (Melvil Poupaud) and Lea (Melanie Laurent). Vanessa basically starts to stalk them when she discovers a peephole from their rooms to the one next door. It becomes an obsession. As Vanessa becomes increasingly distant from Roland, he begins to drink more and his writing block is stuck in place. Even more frustrating is when Vanessa accuses him of wanting the girl next door. Vanessa hinge is definitely loose as she tries to sabotage her marriage and maybe damage the young couple. It's tirelessly self involved.

At this point one begins to focus on the set decoration, the cars, the clothes, and those amazing false eyelashes. There's lots of nudity and any questions on how Angelina's post mastectomy body has turned out is finally answered. Any woman who has survived this will be envious of the results. The acting of course is superb as to be expected with remarkable actors. It's just a tediously relayed story that one is happy to see finally end, at least on a promising note.
(Review by reesa)

Email ThisBlogThis!Share to TwitterShare to FacebookShare to Pinterest
Labels: By The Sea review