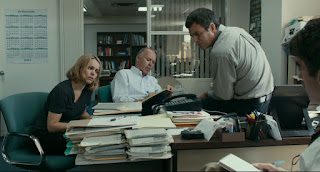 The highly anticipated film, Spotlight, tells the intensely fascinating story of the journalistic team by the same name, who work for the Boston Globe doing long term investigative reporting. When the old leadership is replaced by a younger, hungrier guiding force in editor Marty Baron (Liev Schreiber), who also happens to be Jewish, the team is strongly encouraged in 2001 to dig deeper in to allegations that the problem of pedophile priests might be deeper than just the one or two incidents of memory. The problem posed by this mission is that in Boston, the Catholic Church has had it's hand in and exerted a strong influence on quite a few organizations for many many years. These range from the police force, legal agencies,  local government, education, and even the press. So the task ahead of Spotlight is not one to be taken lightly, as the Globe  has a Catholic majority readership as well.

Their detailed investigative work would eventually fracture the city and bring a highly regarded, long established institution to its knees. Their Pulitzer Prize winning work would expose decades long occurrences and a multitude of cover ups by the very groups the church wielded power over, leaving scores of wounded and damaged souls in its wake. The work of Spotlight would bring  national attention not only to Boston, but the ripples created would set off a world wide awareness of a much deeper problem of incidence, coverup, and prosecution avoidance climbing up to the highest levels of the Mother Church.  The script is tight, the performances spot on and the story is told through the hungry eyes of the reporters who, little by little, turn  over rocks and boulders in the search for the full depth of truth below the tip of the iceberg.

The film stars Rachel McAdams (victims reporter Sacha Pfeiffer), Michael Keaton ( Spotlight leader Walter Robinson), Mark Ruffalo (reporter Mike Rezendes), Brian D'Arcy James (a reporter who has the story hit a little too close to home) and Stanley Tucci, (as victims advocate lawyer Garabedian)  This film straightforwardly handles the material tastefully, and portrays the victims with respect  as their stories are told through anger, remorse, shame, detachment and utter brokenness, including a meeting with an older predatory priest sheltered away at his sister's home who unwaveringly confesses quite matter of factly.  The depths of the coverup and ultimate exposure of the strategies used to silence the victims will leave viewers dismayed and perhaps angry. As the film ends, the extreme pervasiveness of the universal problem is revealed on four title cards. This is reporting that changed the world and the Catholic Church forever. The power of the press was the vehicle for the power of the truth in breaking down a corrupt entity exerting a twisted power over its people.    What make it all the more interesting is that the reporters are mostly Boston born and raised, fully aware of the local Catholic influences. They are humans dealing with other humans; Professionals charged with a task that in the beginning they are not sure they wish to tackle until they begin to realize that this is something they must pursue with every investigative tactic and research skill that they possess.
(Review by Cheryl Wurtz)