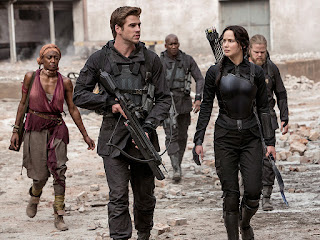 It's finally over! The Suzanne Collin's trilogy of books published between 2008-2010 and made into four movies has finally concluded. The wildly successful young adult series with it's violent dystopia theme involving young people chosen from the 12 districts ruled by the Capitol to fight each other to the death. The purpose being it keeps the district in check and lets them know who is boss. There was a 13th district and they tried to rebel, so the games were initiated to remind everyone of their punishment. If you can buy that, then the rest of the story will be easier to swallow.

Directed once more by Francis Lawrence who did the last two films was written by Danny Strong and Peter Craig. It follows the events of Mockingjay Part 1, which was with all trilogies somehow managed to be stretched into another movie. Katniss (Jennifer Lawrence) now the leading inspiration of the full scale revolution against the Capitol believes the only way to stop the madness is to kill President Snow (Donald Sutherland). She tries to leave the rebels on her own, but the Rebel President Coin (Julianne Moore) and Plutarch Heavensbee (Philip Seymour Hoffman) decide her idea will be controlled by them. They send a squad to accompany her with a film crew to show the face of the revolution fighting her way to the Capitol. The whole effort becomes a Hunger Games on steroids as the Capitol gamemasters have filled the city with mines, traps and nasty creatures underground. It's the perfect video game scenario as the team must move across the landscape avoiding capture. To make the story more interesting they send along Peeta (Josh Hutcherson) who has been brainwashed into believing that Katniss, his former fiancee, must be killed. This makes things uncomfortable for Gale (Liam Hemsworth) her other love interest. Katniss will eventually have to decide which one to choose in her Twilight-eque type of dilemma. Outside of this quandary of boring romantic partners, Katniss remains a solid female empowerment figurehead. The women in this alternate universe will hopefully inspire young women that they can also be strong, resourceful and tough. Jennifer Lawrence continues to prove that she is truly the next big thing.

Most of the cast from the other movies have a little moment or two like Woody Harrelson, Elizabeth Banks, Stanley Tucci, Genna Malone, Sam Clafin, Natalie Dormer, Willow Shields, and Jeffery Wright. They seem to flutter by in a farewell sort of montage. The quick end to the eventual victory by the rebels seems to be somewhat anti-climatic if you are not familiar with the books. It's not a stand alone movie, which is why a marathon viewing of the other movies is necessary to understand the who, what where and why. But in all, it was a somewhat satisfying ending to franchise.
(Review by reesa)