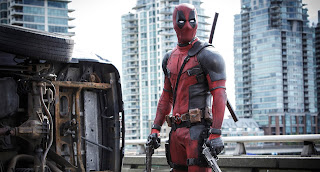 Opening:
This might be one of my favorite superhero movies I have ever seen. Not only was it faithful to the insanity of Deadpool and its atmosphere, it was extremely entertaining. Is it perfect? No, but this is one superhero movie you won’t forget soon. Let’s get reel and break this down.

Plot:
A former Special Forces operative turned mercenary is subjected to a rogue experiment that leaves him with accelerated healing powers, adopting the alter ego Deadpool.

Pros:
Director Tim Miller and the writing team embrace Deadpool as a hardcore, R-rated, movie and run with it without holding back. You could see the passion behind this and it looked like Miller had a gigantic sandbox to play in and he used it to his advantage. It’s humorous, violent, crazy, and Miller adapted this character as best as possible and placed him comfortably in the X-Men universe.

Cons:
This is mostly a humor thing for me. I thought the majority of the jokes worked but I thought in some instances they were trying too hard for a laugh. In terms of the story, I thought the villain was a bit underplayed and I wanted to know more about him and the evil organization at play. The villain was enjoyable to watch and I thought he did well with what he was given, I just wanted a bit more from his character, or at the very least, go even crazier given the nature of the film.

Pros:
Ryan Reynolds is meant to play Deadpool. From the humor and down the most emotional human moments, he becomes Wade Wilson. I always knew Reynolds was great at improv but he really surprised me with the smaller moments involving his inner demons, emotions, and his relationship. The director really let the actor’s impov a lot and you can sense the fun with the actors thus springing the fun on the audience. T.J. Miller is also great and he had a better grasp at the improv than Reynolds did. The supporting cast is really good including: Ed Skrein as a great villain (definitely a step-up from Transporter Refueled), Morena Baccarin and her believable chemistry with Reynolds, and X-Men favorite Colossus and newcomer Negasonic Teenage Warhead are a nice addition as well. I also must add it’s amazing to see PG-13 X-Men in an R-rated X-Men movie and to see them cringe at the graphic violence.

Cons:
Gina Carano. Listen, I think she is a gorgeous woman who could kick my butt at any point of the week, but she can’t act. She can sell an action scene and she is awesome at delivering the choreography but she can’t deliver lines.

Pros:
The action scenes are gritty, exciting, and get your blood pumping adding a nice aesthetic to the overall style of the film.

Cons:
I know it has a lower budget than most superhero films but for some reason it showed a bit in some scenes. It had a TV feel to it in some areas of the movie. I won’t knock it too much because 20th Century Fox didn’t give them much to begin with. Here is to hoping the sequel is even bigger in the budget that way Deadpool can also comment on the budget of it.

Pros:
The pace of the film is infectious and it’s just so much fun to watch making it one of the fastest movies I have seen and one of my favorite theater experiences. The special effects of animated Deadpool were crisp, clean, and well-done for the budget they had.

Overall:
This is a superhero movie that is entertaining to the highest caliber and I had a smile on my face the whole time. Some of the humor didn’t work for me but this is about as true of an adaptation of comic book character I have seen thus far. This movie is insane, fun, gory, funny, and most importantly, refreshing in the superhero genre. This is the first one out of the gate in 2016 and the bar has been set. Your move Batman V. Superman: Dawn of Justice.