Drafthouse Does Dallas: Alamo Drafthouse to Open in Dallas Feb. 12 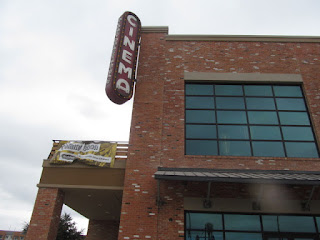 There's a new kid in town movie lovers. It's the first theater in downtown Dallas in 16 years. The Alamo Drafthouse has opened a new cinema in their plan for world domination. Dallas Movie Screenings was invited with other DFW press to walk through the new facility and explore what we can look forward to in the future. The beautiful new building is on the southwest corner of South Lamar and Cadiz, the beginning of the new urban area of Dallas called the Cedars. What is nice that it's near a local DART train stop at Convention Center serviced by the Red and Blue lines. The walk time was tested at 6 minutes. You can also access the theater from the Cedars Station, but we did not test that walking time. Plans for two additional locations in Las Colinas and Little Elm will be opening soon. Tarrant County is in the works, but maybe not in the city of Fort Worth. 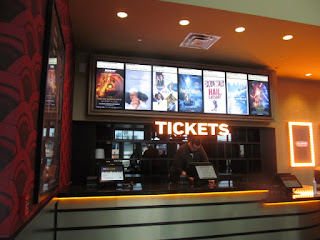 At first the programming between the two Alamo Drafthouses will be similar with first run movies and their signature theme nights. But there will be opportunities to explore community partnerships with the local arts districts and music venues. There are other possibilities to have a role in the local film festivals and even bring a Dallas version of the Fantastic Fest that currently runs in Austin. 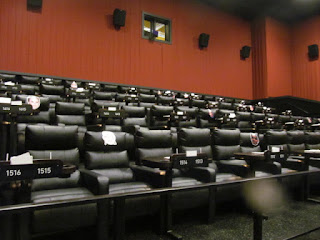 The seats and table setup are different from the Richardson location. The front row has recliner capabilities and they are 20 ft from the screen. There are tables instead of a bar in front of you, leaving you plenty of room to get up and move around if necessary. They have hired 140 movie centric employees, training them in the Alamo Drafthouse art of ninja service. From Feb 8-11, there will be a soft opening to give the new people hands on experience by offering $1 movies and ½ off food non alcoholic drinks. The theater will have it's grand opening on Feb 12, but there will still be special discounts on food for the first week or so. There's plenty of parking with over 400 spots and you don't have to worry about fighting for space from the other Southside events. Plans are in the works for an Uber station for those inclined. 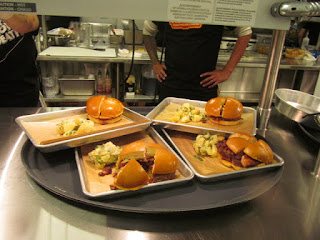 Each of the lobbies of the Alamo Drafthouse has their own theme. Mondo, a sister company of the Alamo Drafthouse will be doing three original Dallas made movie posters for this location. New executive chefs will be making changes to the menus. Of course there will still be the special movie theme menus to enhance your experience. As well as a wide selection of beers on tap with and elite selection, since afterall it is called Drafthouse. There will be a bar and restaurant upstairs with an outside patio and view of Downtown Dallas. More on that later.

Attached is the official press release. Hope to see you all there!

Drafthouse Does Dallas: Alamo Drafthouse to Open in Dallas Feb. 12

Look out, Big D: Alamo Drafthouse Dallas is getting ready for its close-up with a soft opening Feb. 12. Alamo Drafthouse Cinema provides a unique combination of both theater and restaurant, showing first-run movies, independent film and other fun, alternative content while also offering delicious scratch made in-theater food and a refreshing beverage service. Entertainment Weekly dubbed Alamo Drafthouse Cinema “The Best Theater in America,” CNN International said it’s “One of the Top 10 Theaters in the World,” and Time Magazine called it “The Best Theater Ever.” Locally Alamo has earned D-MAGAZINE’s reader’s choice award for Best Theater as well as DALLAS OBSERVER’S Best Theater. Both these accolades were given to Alamo in 2014 as well as 2015.

And now, Dallasites can call it theirs.

Alamo Drafthouse Dallas will soft open Feb. 12 at 1005 S. Lamar Street, at the corner of Cadiz. Alamo Drafthouse is already a part of the neighborhood: the building itself is new construction built from bricks salvaged from other local buildings in the Cedars area that were torn down.
Combining old with new — celebrating the past while looking to the future — is a thematic not lost on Alamo Drafthouse, where there is always something fresh and new.

“There is so much diversity that our programming is never the same,” said Bill DiGaetano, COO Alamo Drafthouses DFW.  “In a given week, we can have a Mean Girls Quote-along followed by a Monty Python Quote-along, a Queen Sing-along and Taylor Swift Sing-along, or a screening of Caddyshack with Godfather Feast on the same day.”

Every theater at Alamo Drafthouse Dallas is 4K digital projection with 7.1 Dolby Surround Sound. Select theaters also have 35 mm capability for classic and repertory screenings. Every seat in Alamo Drafthouse Dallas is a luxury recliner, with the front row of seats featuring a larger chair with a deeper recline and a footrest (all at no additional charge). Additionally, this new theater will feature a 30-foot outdoor screen and four private karaoke rooms so you and your friends can sing your heart out.

Alamo Drafthouse Dallas will feature an upstairs bar with two patios, each with amazing views of downtown Dallas where guests can hang out and listen to live music, sing karaoke, or enjoy other fun parties that Alamo throws on the patio, whether or not they also see a movie while they’re there.
Hungry for more? The extensive menu at Alamo Drafthouse Dallas features an array of freshly prepared food made in-house from scratch with a wide selection of craft beers, great wines, cocktails and adult milkshakes.

Alamo’s attention to detail in film presentation and programming has made it a second home to movie fans all over the world. Alamo Drafthouse Richardson opened in 2013. This new location will be the first in the downtown Dallas area.

“We are looking forward to being in the energy and activation of the downtown Dallas area, in the Cedars, south, and Uptown Dallas,” said DiGaetano. “There is so much growth as far as residents, retail, and office that the potential for the theater is endless.   Traditionally residents who live in a downtown area are more active in regards to entertainment, restaurants, and social events.  It gives Alamo an amazing canvas to program the theater and restaurant/bar.”


Setting Alamo Apart
“People always ask us what makes Alamo different from other theaters. It is our culture and our people,” said Bill C DiGaetano, Alamo Drafthouse DFW, COO. “Alamo always has been and will always be for movie lovers, by movie lovers.”

“Since we are a theater for movie lovers, we took the 3 biggest annoyances of theater goers OUT of the Alamo equation. These include: concessions that cost more than your first car, advertisements longer than a line at the DMV, and talking/texting on cellphones during a film. At Alamo, you won’t find any of these!”

Location: 1005 S. Lamar Street, Dallas, Texas (at the corner of Cadiz and Lamar)

Idea behind it: A Haven for Cinephiles, Foodies, and Craft Beer/Cocktail Enthusiasts. And WAY over-the-top events
.
Leaders in: Presentation quality. If filmmakers put that much effort into making high-quality films, shouldn’t theaters show them the decency they deserve when showing their films? The answer is yes.

Alamo supports: Local breweries. And Alamo only serves fresh, high-quality scratch made food.
Most strict rule: No talking or texting in a theater, and Alamo means business. Patrons are given one warning, then they are asked to leave if the disruption persists. Alamo insists, however, that laughing, crying, sighing and quietly asking your better half to pass another cold beer are all OK.
Signature special effect: Ad-free custom pre-shows. No one deserves to be inundated with ads after paying for a ticket so Alamo has none. Instead, moviegoers enjoy a custom pre-show made in-house. Many times, the pre-show will be directly related to the film, so get there early.

Special events: Alamo’s known for them. Special events, Alamo-style, will begin rolling in shortly after opening.

Food and drink: Freshly prepared food made from scratch, great cocktails and wine, and 32 craft beers on tap. Drafthouse is its middle name, after all. Also, check out the signature wine series. For example, last year, Alamo partnered with The Princess Bride with the wine BOTTLE OF WITS.

Theater Details: Every auditorium is equipped with 4K digital projection, digital 3-D and the latest in sound. Two auditoriums are equipped with two 35mm in order to project classic films the way they are meant to be seen.

Ninja-like service: Servers are so unobtrusive patrons may be startled when their food seemingly appears from thin air!

Kids: Alamo loves ‘em, and patrons are welcome to bring kids with them. Unaccompanied kids under 18, however, are never allowed at Alamo. Kids under the age of 6 are only allowed at select “baby day” screenings. G and PG films allow Children under 3.

About the Alamo Drafthouse:
The Alamo Drafthouse is a lifestyle entertainment brand with an acclaimed cinema-eatery, the largest genre film festival in the United Sates and an online collectible art store. Named “the best theater in America” by Entertainment Weekly, the Alamo Drafthouse Cinema has built a reputation as a movie lover’s oasis not only by combining food and drink service with the movie-going experience, but also introducing unique programming and high-profile, star-studded special events.

Email ThisBlogThis!Share to TwitterShare to FacebookShare to Pinterest
Labels: Drafthouse Does Dallas: Alamo Drafthouse to Open in Dallas Feb. 12